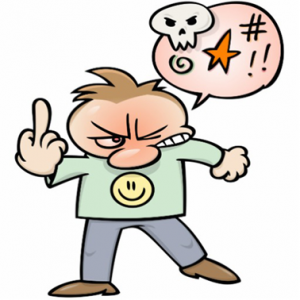 Scientists have discovered that uttering swear words can help to lessen the feeling of physical pain.

A study at (the UK) Keele University found that volunteers were able to withstand pain for longer when they swore.

Dr Richard Stephens, who conducted the study at the university’s school of psychology, believes it may explain why swearing is still common place in languages around the world.

Stephens suggests that swearing could have evolved as a way of raising aggression levels and reducing the feeling of pain to allow our ancestors to flee or fight back when attacked by predators.

He said ‘We think it could be part of the flight or fight response. In the volunteers who swore, we also found they had an elevated heart rate, so it could be increasing their aggression levels.

“Increased aggression has been shown to reduce people’s sensitivity to pain, so it could be swearing is helping this process.”

The results of the study are published in the journal NeuroReport

The study found that volunteers who swore were able to keep their hands submerged in icy water for an average of 40 seconds longer than those who did not swear. Their experience of perceived pain was also lower.

The volunteers’ heart rate was also measured and found that it increased while swearing.

Dr Stephens said that swearing is quite an emotional form of language and it is an almost universal human linguistic phenomenon.

“When my wife was in labour with our daughter she felt the need to swear heavily at one point, but was very apologetic afterwards. The midwife said they were used to that kind of language on the delivery ward, so it got me thinking.”

“Our research shows one potential reason why swearing has developed and why is persists.”

Summarised for byronbodyandsoul.com by Mark O’Brien from an article Swearing can reduce the feeling of pain by Richard Gray