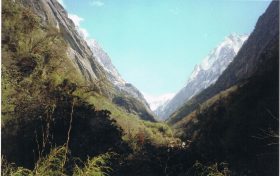 After being in Kathmandu for a few days we headed off on our Nepal trekking adventure. Pokhara was the next destination as a great place to visit while our visas were in process, a three- to four-hour motorbike ride, again through the ghats, which neither of us was thrilled about. With scarves wrapped around our heads to stop the smoke and dust and our luggage tied onto the bikes, we were off. The ghats were much easier to navigate going downhill though we were both very relieved to reach the cleaner air at the bottom.

We stopped along the way at a Tibetan orphanage, which  was amazing, enjoying the Tibetan Buddhist influence in Nepal, which is very strong.

Pokhara is the jump-off point for most people who go to Nepal to trek, and as such was full of fit and mostly young Westerners. A beautiful place set around a lake with majestic peaks all around.

Pokhara teemed with funky-looking Westerners and the usual semi-Western restaurants and occasional bars catering to them.

The whole town is geared towards trekking: touts, guides and porters, shops selling warm clothes and other walking paraphernalia. Accommodation was varied and usually cheap, with every room seemingly offering fantastic mountain vistas.

There are many different walks on offer and we elected to do the walk up to the Annapurna base camp, a four-day walk up to 4130 metres, way higher than I had ever been before. After the first day, which began, after we were driven to the starting point, with a steep thousand-step climb, Venu felt sick and decided to return to Pokhara, and after arranging to meet in a few days, I plodded on by myself.

I had never walked with a backpack before and found that first section really hard going, marvelling at the porters climbing it loaded down with up to four backpacks. Once I had made it to the top, however, my outlook changed. The altitude did make it hard to walk, but the vistas, the spaciousness of the Himalayas and the comradery with other walkers I met whenever I wanted, meant it was well worth it.

The Himalayas. The rice terraces from time immemorial cascading down the mountains, sometimes in every direction, a clear reminder of the meagre lives that have been eked out over centuries, and the sheer hard work that made and still makes life possible there.

And of course there were the wizened old women who passed by with the loads of firewood, kerosene, bottled water and food supplies for whatever restaurant they were supplying, which dwarfed them, who just seemed to keep going. The equally wizened old men loaded down with more than a donkey-load climbed up and up, never stopping for a breath, rarely talking or looking anywhere other than at the next step, just continual motion as if stopping might be fatal.

I came across a few Israeli groups walking unimpeded by backpacks, which they had assigned to a porter, occasionally a Sherpa, who’d soldier on with two and sometimes even four backpacks on his back. 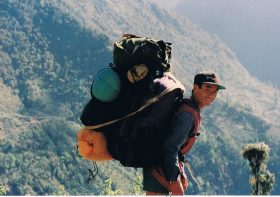 I liked to tease them a bit, my Aussie conditioning around laziness and unfairness kicking in, but they were quite happy to not have to carry their own stuff while also providing a well paid job for the locals. They said that after their years of army training and service they’d had enough of physical stress. OK, fair enough.

The pathways were well marked and every hour or so there was a village with one or two cafés where there’d always be someone sitting having a chai and a joint, gearing themselves up for the next stint. There were also stone guesthouses that were fairly basic and not particularly well insulated, and cold showers that nobody seemed to be taking advantage of, not surprising as it was approaching freezing point once the sun went down. I appreciated the heavy coat and boots I had bought in Kathmandu.

I heard of someone being injured falling onto some rocks, and who, with a broken leg, was being carried down the mountain by the porters. Tough all round. Glad it was not me, but I was somehow reassured that if something happened, I would indeed be able to get down the mountain to Pokhara where at least there was some semblance of medical care.

It being late April it was the beginning of the avalanche season, and we were all warned about putting our packs down on the path, anywhere, and to beware of river crossings, which is where the avalanches would usually hit. I heard the odd crack as I was walking along but did not see one until coming down the mountain a few days later. 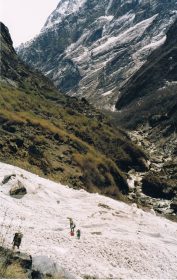 Crossing an avalanche from the day before

I heard of a walker who’d put his pack down to walk up a bit to take a photo when an avalanche happened and swept it away. His backpack reappeared some days later floating downstream on top of the ice, totally dry, with everything still inside. Lucky.

The climate varied quite a lot on the walk, with a tropical bamboo forest appearing around one bend, and some sacred Assamese monkeys jumping around the top of a waterfall and staring at me. That this tropical microcosm somehow existed at this altitude surprised me.

The mountains were just magnificent and the air, while thin, was clear, clean and fresh, and I felt quite high, and rarely smoked any of the Nepali charis that was usually on offer wherever I stopped.

I loved the rice paddy vistas, the rocks that were everywhere, exposed by erosion, the sheer wildness of the nature. As most of the trees had been chopped down for firewood over the years there was much erosion everywhere I looked 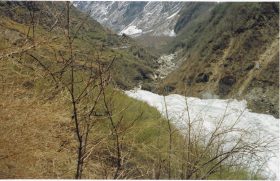 An older avalanche that was slowly disappearing as the stream melted the ice from underneath.

Finally at dusk after four days I arrived at the Poon Hill camp where there were a few tents set up. Even up here, at 3200 metres, there were water bottles and food for sale: that someone had carried everything for two days (they walk much faster than me!) boggled my mind. Snow was melted for cooking and washing, but all bottled drinking water was carried up.

There was not much up here but I really loved the stillness, the hum of the mountains resonating like a deep OM, the Hindu sound of the universe, in the core of my being. The magic of the Himalayas. I had initially intended going all the way to Annapurna Base Camp but I was already labouring in the thin air, and anyway felt it would be much the same there as it was at Poon Hill only higher! I had the mountain experience I was looking for. I’d had enough and was ready to go down again.

It was a bit too cold to sit outside at night for long so after a little conversation and not much in the way of oxygen, I retired to a warmish bed where I soon fell asleep.

Morning arrived, bitterly cold, and after a quick breakfast and brisk face wash, it was time to come down the mountain. I elected to go a different route, one that would take a day less and bring me close to Pokhara. It took me through another valley and upon musing that I wanted to see an avalanche, one happened right in front of me. Spectacular! Awesome power.

I had seen a low stone wall ahead of me and had the thought that it would be a good spot to have a rest and watch an avalanche from! 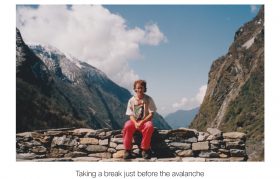 Once I arrived there I took a photo of myself and then I heard it: a loud crack reverberating around the valley. I looked up and saw the avalanche, quite high and of no danger to me! I could see it rushing down the mountain in a big cloud of snow and ice flooding down like a solid waterfall. It was stunning, and I was very grateful to see it without having to be worried about it impacting on me. 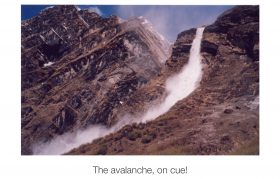 I sat a little longer, quite amazed at how I ‘knew’ the avalanche was about to happen, rolled myself a little joint, which I smoked, and then started walking again.

This path also went through a huge rhododendron forest, which was stunning as they were in bloom at this time. I saw a lookout tower, which I climbed, and finding it sublimely peaceful, sat and meditated for a while.

It was very quiet, still, the hum of the mountains, the hint of a breeze through the forest, the only things to hear.

When after some time I stood up and looked out, I saw a glimpse of what I could only imagine was a snow leopard disappearing into the trees. Wow! It took my breath away. A snow leopard! People search for them for lifetimes and never see them! I was pretty sure it was one, as what I saw, in an instant only, was the right size and moved like a cat, furtive and assured at the same time.

I felt blessed. What a day I was having!

After walking for another two hours I came to a village where I found a place to stay and had some dinner. After dinner I started feeling bad, a stomach bug, and so the night was largely spent cramping while squatting on the toilet. Whether delayed altitude sickness, dehydration, amoebas or simply a psychic release, it was very unpleasant and exhausting.

I’d heard that there was a great viewing area to watch the sunrise hitting the triple peaks of Annapurna that I couldn’t come all this way and not see, so with little sleep and pretty constant cramps and an empty stomach I arose at 5am and trudged in the dark with the other walkers up to the viewing area.

The shades of pink that flavoured the snow-covered peaks as the sun rose were stunning, breathtaking, the second time in 20 hours I’d lost my breath to beauty. The sense of awe, majesty and reverence was written on everyone’s face. We all sat quietly, nobody moved to say anything, enraptured by the beauty that seemed to enter us all. 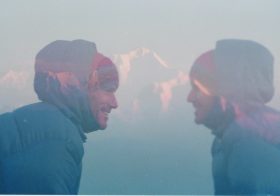 Annapurna peaks, a double exposure photo I made

And I was cramping! I left after a little while to visit the toilet again, and after forcing some scrambled eggs and toast down my throat it was time to move on and try and get down the mountain. Resting here for a day didn’t seem like a good option so I decided it was better to push on. I knew there would be places to stop every hour or so and another hiker had given me some pills, which seemed to help.

Exhausted, I arrived back in Pokhara the following evening, and after finding Venu — easy really, just find the coolest looking café and coolest scene and he would be in it — and after a mutual debrief and eating some food, I slept for 14 hours. My stomach had settled down; it seemed I just needed a Nepali cleanout!

This is an excerpt from Busted in India by Mark O’Brien, now available on Amazon