Congratulation! your data has been updated.
Articles / #metoo / #metoo expanding its reach 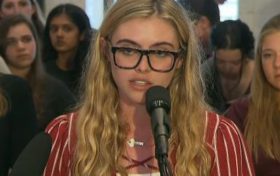 #metoo expanding its reach? In mid February 2018 there was yet another US school shooting, this time in Florida and there were 17 deaths. While previous responses to mass shootings were ignored by Trump, this has been turbo charged by the #metoo campaign.

Truly powerful voices have rattled the cage of even Trump who, in a hopeful moment gave what was obviously a sop to the protests and chose to ban a device that turns a a semi-automatic weapon into an automatic weapon! I mean really? Does he really beleive that is gonna be enough for women? That kind of drip feed might be enough for guys, who go, ‘gee, I understand how difficult it is’ to make changes, but for an angry woman, or girl, no friggin way!

Hold onto your seats folks cause I reckon #metoo has unleashed something that has never been seen before in history, and briefly glimpsed in the 60s and womens lib movement! Previously ‘untouchables’, the elite, are now extremely vulnerable to the forces of #metoo.

It is interesting that on a personal level for Trump. I think we all think that he is a male chauvinist pig, one who perhaps has never really been ‘nailed’ by a woman in his life. He is in for one hell of a surprise, with the thousands of individual woman and girls coming out swinging, who do not care about the odds of winning or who loses their heads. Trump’s room to move just got radically stifled. To paraphrase Trump, it may be that he is about to have his balls squeezed in a way he never imagined.

Trump just happened to be president in the time of #metoo, possibly he even kicked it off with his pussy grabbing claim, and it is not gonna give him an easy ride anywhere or anytime soon.

These voices are all women’s or girls. Teenage girls yelling into microphones, mothers screaming into TV cameras. This either was not happening before or was not been aired by the media. What has happened is #metoo, that has empowered women and made the media snap to attention.

If we consider for a moment what happens when the damn bursts for the women in our lives, what happens when it all gets too much, when she reach breaking point from not being heard or supported. Everyone would know that, either from their mum, their partners, their sisters of their daughters, the maelstrom that breaks plates, that sends psychic missiles to anyone within range. The rage that is released and briefly owned is immense and not to be trifled with.

#metoo has released and harnessed this rage, and it is not going away any time soon. #metoo is the phenomena that the male power structures have been dreading for thousands of years. It is the reason for all of the oppression and put downs and sexual abuse and degradation over millenia; to shut women up!

Sorry, but the game is up! Getting a woman to shut up now, well, good luck trying to do that! Women are being empowered, are claiming and wielding their long buried rage-fuelled power, and heads are gonna roll, and keep rolling, as anyone caught up in #metoo can testify to.

Interestingly enough, as women are empowered, so are men who have been doing the on-the-ground dirty work for the power elites, for the religions, as if #metoo has helped them grow some balls too.

Make no mistake, the current free-for-all enjoyed by the weapons industry is going to end soon. With the mid term elections being held in October in the US, a coalition of gun control activists have just spent $230,000 on a double page spread, in the New York Times, listing 100 US politicians who receive donations from the NRA. See  ‘Complicit’: US politicians who received money from NRA named in ad

See also on this website, #metoo, Sex abuse as abuse of power

One response to “#metoo expanding its reach”