Congratulation! your data has been updated.
Articles / Environmental Health / Blowin In The Wind: A Film Review

Blowin’ in the Wind, by award winning filmmaker David Bradbury and co-producer Peter Scott is a wake-up film that exposes the genocidal catastrophe of the use of depleted uranium in weapons.

From Iraq to Kosovo, the legacy of cancer, birth deformities and contamination in both the local population and the UN and coalition soldiers projects itself for another 4.5 billion years.

As Leuren Moret, geoscientist and one of the leading voices in the DU debate, says, ‘They have altered the genome for the entire planet forever with this depleted uranium.’

The film also exposes the secret 20 year agreement the Howard government signed in 2005 with the US to hold ‘joint military exercises’ including DU weapons testing.

In effect these agreements turn areas of Australia over to the US for bases and bombing ranges. Areas such as Shoalwater Bay, near Rockhampton, and Lancelin just north of Perth have been set aside for ship-to-shore and aerial bombardment.

A massive site in the Northern Territory (NT) has been designated as a test bombing range, where B52s and Stealth bombers will be dumping their bunker buster bombs.

According to Blowin’ in the Wind, it takes three semitrailers of bombs to load up a single B52 bomber, and, from the beginning of 2006, there will be squadrons of B52s along with Stealth bombers flying from Guam to drop their payloads on the bombing range in the NT.

Our kids’ future is blowin’ in a nuclear wind. See this film then get bloody angry.
John Howard (the actor)

If these bombs are DU tipped with the 2.2 tons of depleted uranium they usually carry (and presumably if the US wants to test its bombs it needs to test the ones it uses!), then it may well be that 100s of tons of DU will be dumped, daily, from these planes, exploded and then vapourised, going straight into the atmosphere and sailing with the wind over to the east coast.

Remember, too that Lancelin is one of Australia’s largest lobster areas, and Shoalwater Bay is on the Great Barrier Reef, so any depleted uranium particles entering the atmosphere will go right into the environment of the richest diversity of marine life on the planet.

To date it is impossible to assess any health effects of these bases. Generally DU poisoning takes a couple of years to manifest.

The number of US soldiers on medical disability due to DU in Gulf War One doubled between 10 and 12 years after exposure.

The World Health Organisation has also predicted a doubling of cancer rates by 2020.

One of the big points of the film, and there are many, is the undemocratic nature of these secret deals between the Howard government and the Americans.

How, in a democracy, can a government make a secret agreement with anyone, particularly when the timeline of that agreement extends 20 years into the future, and probably beyond?

These deals, part of the Son of Star Wars Program, will certainly destroy Australia’s social fabric through the various economic tightenings enforced by quadrupling the defence budget.

Bradbury and Scott also mention the proposed nuclear dump in the NT, and we discover, via footage of some station owners, that the dump is on the confluence of three rivers. [As of June 2014, the owners had won their legal battle to stop this] 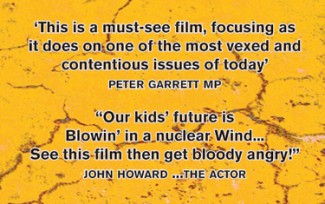 It may be that a contractor or perhaps even a government department can guarantee that the storage facility will work for the next 10 years, possibly even the next 20 years, but what happens in 100 years, in 500, in 10,000, in a million…?

Get a copy of this DVD, show it to your friends, have a showing in your suburb. It must be seen.

See also on this website, Depleted Uranium: a Legacy of Treason by the same author on this subject