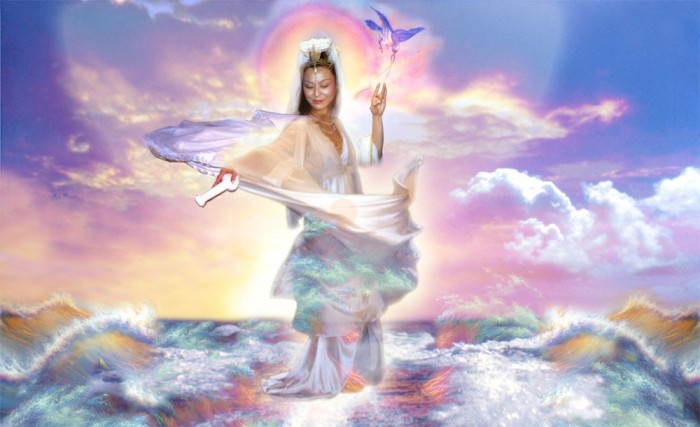 Tara, Kuan Yin, The Lotus Goddess is part of a series about Indian Spiritual Mythology on this site.

The Lotus Goddess existed in India long before the invasion of the Aryans.

When the divine life substance is about to put forth the universe, the cosmic waters grow a thousand-petalled lotus of pure gold, as radiant as the sun.

This is the womb of the universe, the generative organ of the waters – the female, maternal, procreative aspect of the Absolute.

The lotus is personified as the Mother Goddess through whom the Absolute moves into creation.

She stands upon a lotus, which is her ‘vehicle’. In Aryan art She is removed from her lotus and the male god Brahma is seated in Her stead.

The ubiquitous lotus is a sign of her presence even where her human features do not appear, and not uncommonly the masculine divinities even copy her traditional poses… through time the lotus becomes detached from the goddess Lotus in art and consigned to other powers.

Perhaps the most surprising of the new assignments is to that of Prajna-Paramita, the highest feminine personification in Mahayana Buddhism.

The wisdom (prajna) that leads to Nirvana is the highest virtue (paramita): it is the very essence of the Buddhas, the wholly enlightened ones, and the Buddhas-in-the-making, the Bohdisattvas, must bring it to perfection.

The ancient pattern of the Goddess Lotus has undergone a radical transformation of meaning.

Mother Earth has become the queen of the spiritual kingdom attained through enlightenment (bodhi), representing the extinction (nirvana) of both individualised consciousness and the cosmic manifold of biological, human and godly being.

She represents the termination of delight in earthly or even celestial existences, the extinction of every craving for individual duration; she is the adamantine, indestructible, secret nature of all and everything, itself devoid of all limiting, differentiating characteristics. 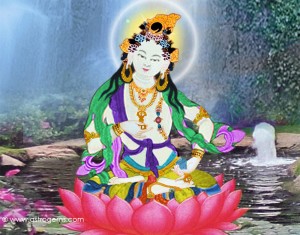 The lotus expresses the idea that we are all virtually Buddhas,

There are several manifestations of The Lotus Goddess in the Eastern traditions.

The Lotus Goddess Tara is the patron goddess of Tibet. It is said she was born of a tear shed by Avalokita in pity for the suffering of sentient beings.

There are 21 forms of Tara, the two principle embodiments known as the Green Tara and the White Tara.

They are much alike except that, from her seat upon a moon disc supported by a giant lotus, the Green Tara extends one foot as though about to rise from meditation, whereas the White Tara sits in meditation posture.

She is further differentiated by having a visible ‘wisdom eye” in the centre of her forehead as well as eyes set in the palms of each hand.

With both forms, the head is charmingly inclined , the body a trifle arched so that the left shoulder is perceptibly higher than the right; one hand, held close to the heart, forms the mudra of protection and the other, resting lightly upon the knee, forms the gesture of bestowing gifts.

A long-stemmed lotus rises from the crook of the left arm.

Heavy ornaments of gold adorn the high-piled hair, throat, wrists and ankles; the filmy garments – bright gauzy silks fluttering from the shoulders and a series of many-hued silken skirts – leave the slender torso and smoothly rounded breasts uncovered in the manner of ancient India.

The whole effect is so ravishing that she might well arouse the very passion that she is frequently invoked to calm were it not that she inspires a kind of exalted reverence…..she is imbued with the power to vanquish lust as easily as sorrow.

Though sweetly dignified when invoked during meditation, Tara’s nature is as fun-loving and mischievous as that of any of the sixteen-year-old girls she so often resembles.

In Tibetan Buddhism personified forms (such as Tara) are regarded as representations of possible aspects of one’s own inner nature – and not as strictly separate entities. 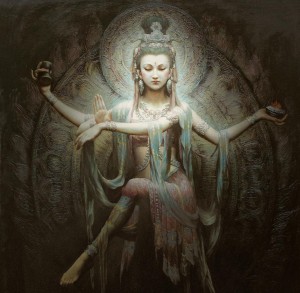 Meditation on various “deities” and other images has a profound effect on one’s inner being.

Each image visualized serves as an archetype, evoking responses at a very subtle level of consciousness, thereby aiding in the delicate work of inner transformation.

In China She is known as Kuan Shi Yin – “She-Who-Hearkens-to-the-Cries-of-the-World” – and is the Chinese Goddess of love and compassion.

Kuan Yin is unique among the heavenly hierarchy in being utterly free from pride or vengefulness, and is reluctant to punish even those to whom a severe lesson would be salutary.

She portrays compassion and its liberating powers.

In Japan Tara is known as Kwannon.

Kuan Yin’s appeal is that she responds to the heartfelt needs of ordinary people.

She does not impart any great new philosophical truth, nor lead the initiate into deep mysteries of meditation.

She is accessible to the most ordinary and the most lowly. She is the friend you call upon in times of trouble.

She is the hand that guides.

She understands the longing for children, the fear of pain, the anguish of a lost child or of a lonely parent.

It is in this that the strength of Kuan Yin lies – and all this is based upon her basic attribute of compassion, derived, as ever, from the Lotus Sutra.”