Congratulation! your data has been updated.
Articles / Personal Activism / UFC as a sign of our times 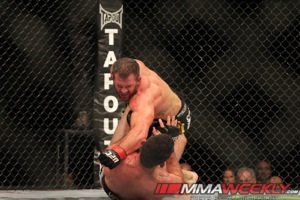 I was driving around recently and was really disturbed to see every bar crowded with under 35s  (Y Gen?) watching a UFC match. I instantly saw UFC as a sign of our times and a manifestation of all that is wrong in our increasingly disconnected and violent world.

For those who do not know about UFC (Ultimate Fighting Championship) you have two people in a circular ring set in a cage with a referee, who are allowed to use any means to defeat their opposition, and it is last man standing, or if one surrenders.

Kicking, punching above and below the belt (genitals and gouging eyes etc are off limits, but everything else seems to be OK), bashing someone when they are on the floor and haven’t surrendered cause there is too much money at stake, fighting like Roman gladiators for a purse, modern day ‘freedom’.

Where the Roman gladiators were slaves with no choice, the ones today clearly choose this as a profession. A sign of urban desperation perhaps?

How is it possible to love when your profession is about hurting others? Soldiers at least may have a ‘love’ of their country, however that ‘love’ looks like. One has to shut down one’s humanity, any feeling of connection with something greater, with love, to do this kind of thing

The emphasis here is to ‘kill’ the opponent, to finish them. It has spawned the mixed martial arts studios who ignore the foundation of martial arts, being a spiritual as well as a meditative and physical practice, and train their students in one-punch fighting – ie, where you learn how to hurt another, with the emphasis on one punch that will ‘win’ you any given fight.

In Australia over the last few years there seems to be a news report every week of another person outside a nightclub or bar who has been killed by a one-punch fighter.

It tends to look like this: somebody has a dispute inside a bar, walks outside to hail a taxi, and someone comes up to them and whack! Down, hitting head on the curb, and dead.

Perpetrators are usually caught via CCTV footage and go to gaol for lengthy stretches that destroy their and their family’s lives, along with the lives of the dead man’s family and friends being irrevocably altered.

I have watched a couple of UFC Mixed Martial Arts bouts, and have been appalled by the brutality on show. The cheering for the likely victor when he smashes his fist into the face of a guy lying on the ground is a bloodlust I have never seen before.

I have watched the occasional boxing match in my life, though I eschewed this also as it became less about art, a la Mohammed Ali, and more about the power to knock someone’s head off. And of course the characters becoming more and more unsavoury didn’t help my interest much either. 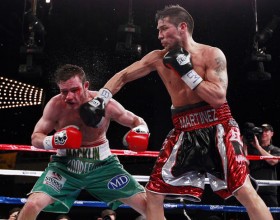 I enjoy to watch AFL (Australian football), a strong contact sport where people can get hurt, although the ever-tightening rules are reducing the incidences of serious injury, with the vast majority of injuries coming from non-contact events, like ACL damage to knees.

So I am no prude, and enjoy watching young men battling with each other over a ball. But, for me there are limits to what I can relate to.

Maybe UFC is just another of the extreme sports obsession appearing all over the world, a sign of people pushing all boundaries. While boundary pushing is human, often these boundaries also have moral components which are not part of the training package.

Its accepted that the advertising industry thrives by making people believe that what they have is not enough, that they need another one of ‘those things’, a bigger TV, a faster car and that buying this will make them happy.

This dissatisfaction with ‘what is’ has also extended to people’s bodies too. Bigger tits, tighter ass, longer dicks, cooler tattoos and piercings, plastic surgery, are all available to make one more individual, more unique, and more attractive to potential mates.

Ultimately it is our dissatisfaction, (or at least that is what we are told, that sex is dissatisfying) with sex is behind most marketing programs.

Is our addiction to screens fuelling our blood lust?

See Screen addiction as electronic cocaine and digital heroin on this site for information about research that shows how screen time changes out brain, and maybe reduce our ability to feel empathy.

When kids spend an average, say 8 hours a day, looking at a screen, be it TV, a phone, ipad or computer, their brains behave exactly as if they were on cocaine.

This impacts the brain’s frontal cortex, impacting the ability to control impulses, functioning like releasing a brake on manifesting our craziest ideas.

Given the age demographic of UFC watchers, most of the these people grew up with masses of screen time and the advent of serious computer games and the ubiquitous nature of technology in their lives.

Is WFC therefore simply a byproduct of technology that has run so much faster than out ability to understand it?

The looks in the eyes of the UFC combatants can be terrifying, as though you are looking into the depths of hell. Dead, killing eyes. The total disregard for the wellbeing of another, regardless of the pre- and post-fight camaraderie, is scary to me, a bit like the Lord of the Rings and metaphors of the darkness waiting to be unleashed.

The fact that women also do this is anathema to me. Yes, women have fought for their right to die on a battlefield, to use guns, to fly fighter jets etc, (all of which I find a bit weird personally anyway but accept) but to me there is something very weird about putting women in a cage and let them go at it until only one is standing. 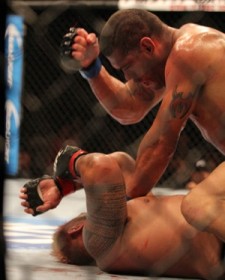 I understand and support women being able to physically defend themselves and who wish to compete as well, but UFC fighting in a cage is not part of any definition of the feminine I can relate to.

Nor is it something I would want my daughter or niece to aspire to.

The UFC has plans in 2016 for running big events in Perth, although the government is refusing permission on the grounds of being against fighting inside a cage. Possibly a few political or community donations may soften this opposition and the event will go ahead.

We are told constantly about peak sexual experiences, especially the ones we are missing out on, and of course as we reach one peak we are told of the next one, much like being in the Himalayas where you only see the next peak.

Ultimately the quest for higher and higher is the same, neurochemically, as any other addiction we might have. Whether it is sex, gambling, drugs, shopping, food, it all hits the same brain centres and releases the same neurochemical reward. See articles on the Reuniting website by Marnia Robinson for more on this.

But what of connection? Nobody seems to ever talk about how great the connection with their lover is! Nobody ever talks about the simpler and far deeper pleasures, and life altering qualities, of connection. Why: because there is nothing to sell!

It is our dissatisfaction with ourselves sexually that drives most of our economic activity, and, in my opinion, our addiction to ever increasing thrills and moving closer to our edge than ever before in history.

This quest is largely to get the ever-increasing dose we want to become used to, of our neurochemical reward, hormones that connection and connected sex brings. See The Real Cause of Addiction

When we are (or even believe we are) sexually unsatisfied we are very easy to manipulate and controllable via excitement. UFC provides the kind of extreme excitement that hits and ultimately exhausts the brain’s reward centres, and we need an ever-increasing excitement level to get the same neurochemical hit and the resultant high.

It seems to me that UFC is the height of decadence, the manifestation of an insatiable bourgeois lust for blood.

I wonder how far off it is that crowds at a UFC match will be asked to give a thumbs up or thumbs down like the Romans were, about whether a combatant should live or die.

For further reading see the following

The Likely Cause of Addiction Has Been Discovered, and It Is Not What You Think