Congratulation! your data has been updated.
Articles / Personal Activism / Decompassion in the age of Trump 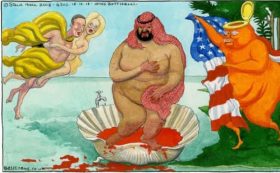 Are we all turning into pathetic Trump imitators?

It seems like every day over the last two years the media have reported on Trump’s latest cringe-worthy statement about women, about nazis, about the environment or the fake news organisations.

Outrage follows outrage, and most people on the planet are still capable of being shocked by what passes for the new normal.

What has disturbed me, nearly as much as Trump himself, is the Trumpist approach to belittling one’s opponent that appears daily on Facebook and other social media.

We get self-righteous and outraged when Trump talks about grabbing women by the pussy, or that another women is ugly and undeserving of respect, yet we laugh at the belittling of Trump himself and the size of his penis that the world was busy with for some time and the caricatures of his no-longer-20-year-old body and hairstyle. I dare to say that if Hillary had been elected any public statues of her naked no-longer-20 body would have been tolerated.

Has Trump succeeded in dragging the conversation down to his level? Has his presence at the top of the political heap not only given his supporters a platform and permission to bellow their hard-right opinions but also the rest of us licence to indulge in boorish adolescent thinking and all the childish put-downs that pop into our heads?

Has Trump made us all feel it is OK to be puerile and childish and just as unable to have decent and respectful conversations with our perceived political adversary as he is? Where ‘enemy’ has supplanted ‘adversary’?

Trump has not only succeeded in trashing the dignity and authority of the US President and seemingly the political processes worldwide, but has given everyone else a licence to do the same, a licence that everyone from kids to commentators to little old ladies are using with no regard to decent and supposed civilised behaviour.

Clearly Trump is unsuited to the position he holds, and from what I can gather he never really thought he could win and just ran to boost his own brand. He is a product of and currently the supreme leader of the boys’ club that has run America since inception.

Trump may not even be the worst president – remember Reagan? He was as much in the pocket of big oil and big business. As was ‘W” who started bogus wars that have defined Western politics for nearly 20 years. Even Obama flew to Saudi Arabia to kiss butt and sign weapons deals.

Trump’s environmental policies may be catastrophic in the short term but they also seem to be pushing the worldwide trend towards reducing emissions and dealing with rubbish etc. His boorish attitude towards women gave the metoo# movement more traction than it otherwise would have gotten, to the point where in November 2018 a woman of the calibre of spiritual teacher Marianne Williamson (remember Mandela’s inauguration speech – Who are we to be small? …) to run for president.

I also get a bit offended by the treatment of Melania who is even more an accidental First Lady. Who knows what deal she made with the devil for her previous life as Trump’s wife, and now she is expected to be on top of everything. Yes she posed naked for magazines, but so did millions of other women. Yes she married for money, lots of it, but again so did/do millions of others.

After the obvious humanity and presence of the Obamas it is easy to see Trump as everything NOT Obama, and maybe that is why he was elected.

Trump is teaching the world about the lack of compassion, dignity, responsibility, kindness, empathy, intelligence, about the fear of strangers and those needing help, about might is right (which by definition every US President demonstrates) and we are lapping it up. Trump shows the world that it is OK to lie, to make up stories to fit a pre-determined diatribe. As readers of his random tweets do also.

In November 2018 Trump was broadly ridiculed regarding his response to the California fires which was about how not raking up leaves etc. had added to the fires’ intensity. Well guess what, the report into the Ash Wednesday fires that devastated similar communities in Victoria recommended regular controlled burning of forest undergrowth to deprive wildfires of fuel and reduce their intensity.

We do ourselves a disservice by jumping on the ‘let’s ridicule-Trump’ bandwagon whenever it rolls around. It is degrading to him and to us, and it is not creative, it is not supportive of the person we want to be or the society we want to live in.

I do not agree with Trump and dislike him and his ilk for all the havoc and destruction they have wreaked and continue to wreak on the planet and its peoples. Insulting him personally, however, is simply just as mean-spirited as Trump himself. We must do better.

Editor of Byron Body & Soul, Mark O’Brien is the author of a wide range of articles. see http://byronbodyandsoul.com/author/mark/