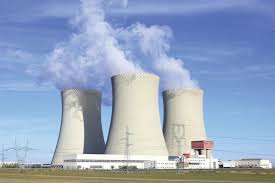 Reality: If the entire production cycle is considered, then nuclear is not only no ‘greener’ than gas, it is actually far less green as the greenhouse gas (GHG) inputs into nuclear power are so massive.

Roughly 32 years of a nuclear plant’s 40–45 years of operation are simply repaying the energy cost to build and maintain it.1

With double the water usage of conventional power stations, (1.8 m/litres/hour) the only guaranteed water supply would be a desalination plant for each reactor.2

Relative to a gas-fired plant, a nuclear power plant produces the same greenhouse gases (GHG) and 1/3 the net energy.

Myth: Nuclear power can save the world from global warming

Reality: Currently nuclear power produces 2.5 per cent of all the energy produced worldwide. If 1500 new nuclear power stations were built over the next ten years, which is three per week, every week, they would provide approximately 10 per cent of our current energy needs.

With 1500 reactors running at once, using 162 tonnes of uranium each, there would only be sufficient uranium for 14 years.3

For the last 40 years, researchers have theorised breeder reactors, which would produce high grade plutonium from the spent uranium.

While this could stretch the nuclear feedstock for centuries, the creation of so much plutonium (enough for 50 bombs/reactor/year) would create more problems than it would solve.

However, a MIT report says that breeder technology is at least 30 years away.4 Therefore any solutions that nuclear power may provide are at best very short lived.

Reality: It is far more expensive than conventional sources, even when expensive carbon sequestation technology is employed to remove the CO2 from those sources. 5 Nuclear is only feasible with massive taxpayer subsidies.

For countries such as Australia with huge resources, both in terms of raw materials and land mass and climate to harvest renewables, it is absurd to consider nuclear power.

Excluding tax incentives (and Bush has just increased these), the US nuclear industry has been granted US$66 billion in grants in the past 40 years.6

In Europe, the nuclear industry has received 10 billion Euros in the last decade. 7

If nuclear power stations are built in Australia, water desalination plants will need to built to guarantee water supply at a cost to the tax payer of $2billion.

Reality: Nuclear power is potentially very dangerous. In any venture it is imperative to do a cost and risk benefit analysis.

Given the potential downsides of nuclear power, the ramifications of nuclear proliferation, nuclear war, nuclear terrorism, the eternal poisoning of our earth, the possible genetic mutations, meltdowns and hundreds of Chernobyls, then very clear and definite upsides must be there.

However, none of the upsides outweigh the risks.

Myth: The nuclear industry has solved its problems

Reality: No they haven’t. Recently four out of ten Swedish reactors were shut down after potentially catastrophic problems were accidentally discovered.

Emergency power systems failed and a meltdown was a distinct possibility with all four reactors.8

Many problems have arisen to do with safety issues that have been suppressed, and in response, as is the case in the USA, the regulations have been changed so that they are easier to comply with.9

There remains no solution to the disposal and storage problem. The biggest problem the nuclear industry has is that any mistakes or accidents are forever.

Accidents arising from human error, from metal fatigue, earthquakes and floods are just as much part of the risk as a hijacked commercial jet-liner.

The myths about nuclear power just keep on being propagated by those with a vested interest. Take them with as many grains of salt as you can find!

Obviously since this article was written we have see the unfolding of the Fukushima nuclear power plant meltdown and the release of millions of gallons of radioactive water into the sea, which has already been measured in waters off the US and in fish caught there.

After 3 years there remains no solution in sight to Fukushima’s problems and therefore the whole world’s problem. Fukushima makes Chernobyl look like a mistake, not a catastrophe.