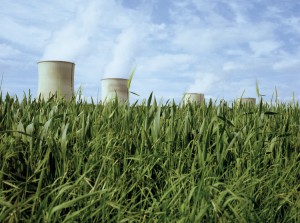 These claims are from the Uranium Information Centre:1

Claim:  In all countries using nuclear energy there are well established procedures for storing, managing and transporting nuclear wastes. Storage is safe and secure, plans are well in hand for eventual disposal.

Nuclear power is the only energy-producing industry which takes full responsibility for managing all its wastes, and bears the cost of this.

Fact:  By early 2007 no real solution to the nuclear waste issue has been found after 50 years of massive investment. The French waste dumps have begun to leak after ten years!2

It may well be that no terrestrial facility will be found or built that is stable enough to guarantee safe storage for the 250,000 years necessary.

Currently every nuclear power plant in the US is literally bursting at the seams with waste that they do not know what to do with.

According to Dr Caldicott in her book Nuclear Power is Not the Answer to Global Warming or Anything Else, there is a backlog of 20 years of nuclear waste awaiting approval of Yucca Mountain (or anywhere else) as a nuclear waste dump before it can be shipped out.

Claim:  The nuclear industry has an excellent safety record, with some 12,000 reactor years of operation spanning five decades. Even a major accident and meltdown in a typical reactor would not endanger its neighbours.

The Chernobyl disaster was basically irrelevant to any Western reactor, or any that might be built today. According to authoritative UN figures, the Chernobyl death toll is 56.

Fact:  Recently four out of ten Swedish reactors were closed after problems were accidentally located. Due to a coincidental simultaneous power cut, emergency power systems failed, almost precipitating a catastrophic meltdown in all four reactors.3

There have been dozens of serious nuclear accidents since the Three Mile Island meltdown. 4

In the US, the UK and France there have been many highly dangerous accidents although none rate a mention in our pro-nuclear media.5

This is typical fudging of the facts by the nuclear industry with regards the death toll from Chernobyl, as people have continued to die from cancers resulting from radiation.

It may be the UN figures quoted referred to the immediate death toll, but ignore subsequent data.

The fact that the nuclear lobby chooses to ignore or discount subsequent deaths also speaks of an inherent dishonesty.

Accurate death tolls from nuclear disasters are notoriously difficult to ascertain. Three Mile island was an unmitigated disaster the full impact of which has been hidden from the US public.

The problem with nuclear safety of course is that any problem is massive, which is why nuclear power plants cannot get insurance and why governments (taxpayers) have to carry the insurance risk.

Claim: Nowhere in the world is nuclear power subsidised.

Fact:  The US nuclear industry has received more than $66 billion in direct subsidies, not including tax breaks.6 These increased under Bush.7

According to the US National Resources Defence Council, not one energy generation company in the US has been willing to order and construct a new nuclear plant in more than 30 years … in the absence of huge Federal subsidies.8

In Europe in the past decade, at least 10 billion Euros has been handed out to the nuclear industry.9 Is not the insurance risk borne by taxpayers a hidden subsidy?

In the US, the taxpayer bears the risk of a $600 billion liability for the nuclear power industry.10

Fact:  There is no way to guarantee ‘safety in any circumstance’.

The question that anybody contemplating supporting the transport of nuclear materials is; ‘How would I feel about nuclear waste going past my house or my child’s school?’

For every 22 tonnes of uranium used, one million tonnes of CO2 emissions is averted. Doubling the world’s nuclear output would reduce CO2 emissions from power generation by about one-quarter

Fact:  Excluding certain unknowable but massive greenhouse gas (GHG) costs, and including the lifetime GHG inputs of the entire nuclear cycle — the mining and milling industry, transport and shipping, water supply — the emissions of a nuclear power plant are marginally less than a similar sized gas-fired plant and with a net energy output of one-third of the same gas-fired plant.

Claim: There is no fundamental difference between fossil fuel and nuclear with regard to water usage.

Fact:  According to the Australian Parliamentary Services, nuclear power plants use double the water of conventional plants.11

A desalination plant would need to be built, at taxpayer expense (approx $2billion) for every nuclear power plant to guarantee water.

Nowhere will that cost be factored into nuclear power economic or environmental or greenhouse gas assessments.