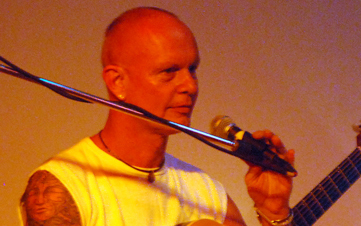 A conversation with Mark O’Brien

I was thinking about initiation and what that means in our society as it heads into another millenium, and thought I’d speak to some friends, get the low-down, and then put it all together in a coherent mix.

Well, great idea! It soon became clear that it is a huge issue with many angles.

When I look at my life, I can see that there was never a particular point  where I felt I became a man, that while yesterday I may have been a youth, now I am a man.

There is no such point, and I think this is the root of many problems in our society. For a female there is menstruation which has been seen as a sign of being a woman, as has been childbirth, but now even that’s no longer felt to be enough, and men don’t even have that.

Oh there are a few significant milestones in my life which could be seen as initiations.

First day at school, first fight, ‘finding sex’ (much better than ‘losing virginity’), taking sannyas (though I missed the personal touch, being a mail-order sannyasin), the first broken heart, the first real Dynamic, strong chemical experiences, all experiences which had a profound affect on how I saw myself. But initiatory?

And what does that mean, to be initiated?

I spoke to a wide range of Byronians (from Byron Bay) on this subject, and the responses I got affirmed for me what a rich resource the members of our community constitute.

Following is an interview with actor, musician, shaman, Darpan who has a penchant for the exploration of consciousness, and loves to rap about it.

“One thing which really stands out by it’s absence in our society is initiation. In traditional societies, cultures, there was always some kind of rite of passage.

In our society all usually happened was that at your 21st you were given a key, got really drunk and maybe got a blow job in the back seat of a car, or something of that nature.

There was no space for people to be introduced to adolescence, the sexual changes happening in the body, no formal recognition of transition.

In the West, where people can afford it, there has been a re-emergence of a sense of ritual, of initiation. All initiation has at it’s core death, the death of the child, the youth.

Aboriginal boys were put in a situation where they were really feeling that death is happening, and have to go through fearful situations, and actually survive the “death” of the child, who may have been ritually forcefully taken away from the mother, and emerge a young man, a different person to the one that went in.

These rituals were carefully designed to be as scary as possible.

The Egyptians used to use trust where you were pushed into situations where “the only way out was in” They had to be able to tap into great courage and not knowing to get through.

Strong existential situations which change who you think you are.

Another way is the use of psychedelics, because their use in high doses always induces the death experience. You really face death, you think that “I’ve really done it this time, I’ve taken too much”.

It is important to have a guide to put it in perspective, to give you a point of reference, someone you could trust who’d been there themselves.

So a space was created wherein the fear of death, all fears, could be encountered in safety.

To reach a point where not so much are you fearless, but rather feeling fear but doing it anyway, to go through it. This is what initiation teaches you.

So what we are seeing today are all these frameworks appearing. North and South American Indian, the Middle Eastern, Indian, even the Western stuff that’s coming, including the secret and arcane Celtic mysteries.

All of these paths share a common purpose, theme, and that is to experience and go beyond death.

You have to go beyond that which you know and step into the transpersonal, that which you don’t know, and what we’re seeing around us is a reflection of that, where we are all trying to find new ways to be to live.

Globally we are going through an initiation, where each of us is having to look at ourselves, asking the scary questions like:

“What are we doing here on this planet?”
“What are these invisible lines (countries) which exist only in our heads and nowhere else”?
“What have we done”?

As the disaster becomes more apparent, unavoidably obvious, a shift must occur. Like the first stage of initiation, some people may not make it.

There’s a guy called Carl Pruven who created the “Theory of Dissapating Structures” whereby any given system will try and absorb any disturbance into itself.

For instance John Lennon’s “Power to the People” was a huge threat, until it became part of the lexicon, used in innane advertising, de-energised and its power co-opted. LSD is now returning, more and more a part of popular culture.

Now if these disturbances grow large enough, strong enough there will be a critical mass reached when the old structure will collapse, revealing the new standing tall and proud.

Like crystals which grow in radical jumps and leaps, not gradually at all. The old is crumbling.

The initiation will be literally into Osho/Christ consciousness of those who are willing to jump. We are really the midwives of Osho’s new man.

In essence any teaching is an initiaton.

Today there are many initiatory experiences that have become part of our recreation, like hang-gliding, bungee jumping, where on a Saturday we might just jump out of a plane, for fun.

Bungee jumping actually comes from an initiation in Papua New Guinea where the youth had to jump out of a tree tied with a lianna vine.

And now its resurgence is perhaps the result of the search for initiation.

Diving into space, when you really don’t know if you’re going to make it or not. Again, initiation is ultimately about trust.

When you look around at all the people who are holding the reins of our society, you see children who never went through an initiation, who never actually grew up.

War served as a kind of initiation, but that was imbalanced, with survival the only goal, not necessarily any existential lessons learnt. There is no formal point that once crossed, you knew you had grown up.

Today it is up to each of us to find for ourselves ways of going to the next layer.

Osho said very clearly to meditate, which I guess is an ongoing initiation that deepens and deepens into ourselves, into the mysteries, the beyond, to learn to be the observer etc, and then you let yourself die, come through it, and you realise that you never die, just a continuous movement through form.

Having had this experience of being larger than death, when you come back into the body you are changed in a profound way, a different awareness of yourself with respect to the world around you.

In the 60s there was a massive and chaotic initiation where thousands of people did LSD, in an environment where there was no frame of reference, no guides, and there were a lot of casualties in this time that forever changed the collective unconsciousness.

In the ancient cultures where hallucinagens were used, Mayan, the Aztec, Indian, there’d be strong rites whereby you’d pass through the portals of death and when you came back there’d be a guide there to take care, to put the journey into a manageable perspective.

In today’s society this becomes problematic as substances are illegal, so kids rarely have the support of an older, more experienced man as they go through their various rites.

With thanks to Darpan.

See also interviews with Anna Davidovich, Michael Light and Graeme Innis on this website about initiation.

Darpan lives in the hills behind Mullumbimby in the north of New South Wales Australia. Musician, shaman and internationally respected authority on the use anthropogenic stimulants in Indigenous cultures.

Visit his website to listen and download music and find out about his upcoming programs and events.