Congratulation! your data has been updated.
Reviews / Dynamic Meditation

Dynamic meditation is perhaps the most radical morning meditation ever devised, and has a radical effect upon your day.

Dynamic mediation is one of many meditation techniques devised by Bhagwan Shree Rajneesh, known in his latter years and since he died as Osho, and is usually started just prior to sunrise.

Dynamic is not really a meditation per se, as it is designed to empty out all of our craziness so meditation, our natural state, happens on its own. Osho said it is impossible for modern, Western people, to be able to sit quietly, as our minds are too busy.

First we need to empty out.

It is recommended to do Dynamic for at least 21 days straight to have the full experience – by all means do more, and don’t make a big deal of it if you do less! For the first few days your body will be sore, and you may lose your voice (!) which goes after 4 days usually.

There are five stages to this meditation.

Jumping up and down shouting ‘hooo!’ for 10 minutes

Standing in silence for 15 minutes

The accompanying music lets you know when to change stages. Eyes are to be closed throughout the meditation.

‘This chaotic breathing is to destroy all your systems of the past. Whatsoever you have made out of yourself, it is to destroy it. This creates a chaos within you, because unless a chaos is created you cannot release your repressed emotions; and those emotions have now moved into the body.’ Osho

This is about focussing 100% on the out-breath, breathing out your nose, keeping the mouth closed, and breathing out as fast as possible, using your whole body to breathe out. The in-breath happens on its own.

This really builds up stress inside, and is where you find out how lazy you are, how much you want to opt for the easy path. I heard Osho speak about this part being all about growing trust, because in this time many fears come into your mind.

After 10 minutes of this breathing you are really ready to explode, and when the music change signifies the stage change, that is what you do. 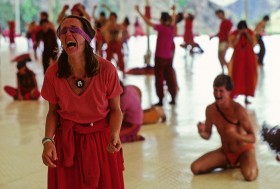 Optimally dynamic is done where there are no noise problems, as in this stage it can get really noisy.

I recall doing this meditation in Rajneeshpuram in the early 80s with 5-6,000 people in a hall, and being unable to hear myself scream above the din of so many others yelling and screaming.

The ‘energy’ in the hall was extraordinary, and something I have never felt again since.

In areas where there are neighbours who may not like to be woken up by people screaming, this meditation can be done silently, using your body to express whatever feelings you have.

The idea is by ‘throwing out’ all the pent up emotions in our system we can experience our world in a new, clear way, and we can experience silence, meditation. Care must be taken not to infringe on anyone also, or to interact with anyone else, as you can be in a very volatile space.

If you do not feel any emotions, ‘positive’ or ‘negative’, pretend, start screaming just for fun, pretend you are crazy, and soon enough it will become real.

‘Then my second step is a catharsis. I tell you to be consciously insane, and whatever comes to your mind – whatever – allow it expression and cooperate with it. No resistance; just a flow of emotions.

If you want to scream, then scream; cooperate with it. A deep scream, a total scream in which your whole being becomes involved, is very therapeutic, deeply therapeutic. Many things, many diseases, will be released just by the scream. If the scream becomes total, then your whole being is in it. Allow yourself expression through crying, dancing, weeping, jumping, “freaking out,” as they say.’ Osho

Next comes the ‘hooo’ phase

Again, a change in the music will let you know of the phase change.

Jump up and down landing on your heels which sends a shock through your sex centre, the pelvis belly area, and shouting ‘Hooo’ when you land, with the hooo going deep in your belly. Hands up as high as you can keep them. 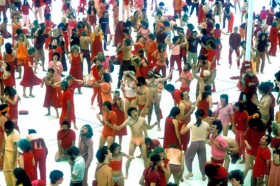 Some people simply stand and thrust their pelvis forward while shouting hooo, but personally I find that it is much better to jump at least a bit.

Each of these three phases qualify as the longest 10 minutes in your life! It is hard, and many times you want to stop, lie down, collapse, but keep going. Bursts of energy will come and go. The arms will drop, the jumping get less, but keep going with the sound, that is the key – let the sound create space in your sex centre.

‘Sufis have used the sound ‘hoo’ to focus themselves inwards, and if you say hoo loudly, it goes deep to the sex centre. So this sound is used just as a hammering within. When you have become vacant and empty, only then can this sound move within you.

In the third step I use hoo as a vehicle to bring your energy upward. These first three steps are cathartic. Really, they are not meditation but just the preparation for it. They are a getting ready to take the jump, not the jump itself…’ Osho

After the loud and chaotic music and activity for the previous 30 minutes, all of a sudden it stops, and the voice says STOP!

You freeze your position, and watch. Watch your breath, your body, the sweat running down, your thoughts – be aware of everything. The sound of morning birds, traffic, whatever, be alert. Be the witness to whatever is your reality. Tired, alive, busy in your mind, quiet in the mind, whatever. Be the witness.

That is meditation, and in that meditation something happens that is beyond words. And once it happens you will never be the same again; it is impossible.’ Osho

After 15 minutes of silence, some lovely music starts gently, and it makes you sway, move slowly, welcoming the new day, the ‘reward’ for the previous 45 minutes. Let your body move, celebrate.

Once this stops and the ‘meditation’ is over, just let yourself be quiet, collect yourself prior to getting up and getting on with whatever your day holds.