Congratulation! your data has been updated.
Reviews / Rolfing 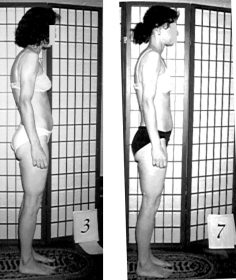 Before, on left, and after Rolfing on right

I was lucky enough to have had a one-off session by way of a sample, and to also have a 10 session series. Both are reviewed below.

The practitioner and I had quite a lengthy pre-session interview about my body – she wanted to know pretty everything that had happened to my body in my life – and she explained a lot about how the session would go.

Normally there is a 10 session protocol, and the body is systematically worked on, opening and releasing the ligaments and fascia systematically.

When I first became interested in things alternative/’spiritual’ in the early 80s, it was considered that if you really wanted to get ‘free’ then you needed to go through a series of Rolfing sessions. It was hard core bodywork in those days.

It was the modality from which many others arose, including Rebalancing.

People I knew who did it always spoke of the pain as those hidden yet controlling muscular structures such as the psoas muscle are worked on and released, and about the new sense of freedom in their body they felt afterwards.

I have not come across a Rolfer in years, as this kind of work became a little unfashionable amongst the ‘spiritual set’ because of its intensity.

In the therapist’s words: The goal: a free, elastic, balanced body and the awakening of the Rolf line, a physical and psycho-spiritual alignment in the earth’s gravitational field. The result: an opening of the individual’s potential.

The first session in the 10 session series is a superficial introduction and this was what I was to receive.

The therapist spoke of it being a kind of mind/body conditioning and preparation for what is to come which actually made a lot of sense to me as she worked.

The type and depth of the massage strokes are quite unusual and are applied to some seemingly odd places. Initially it was a stretch for me to let them in, aware as I was that it was somewhat watered down, until I relaxed.

It was not a session that seems to achieve much or was that pleasant, but I definitely had the feeling that if I were to do the whole series it would be huge, and it would change my relationship to my body in a deep and relatively permanent way.

It was fabulous doing a whole series, working through the whole body in a very specific way.

This is of course the deepest of the deep bodywork, but the practitioner insists on not causing pain, so at any stage if I was in pain, I should say something and she would back off.

It often happened that when she worked very deeply I simply feel asleep, having been taking deeply into my subconscious where the roots of physical tension really lay. Sometimes I had vivid and psychedelic dreams, other times I felt a dreamless floating space.

It is impossible to describe what happens over 10 sessions spaced out over 6 months, but what can be quantified is the improvements I am aware of in my physical structure.

I no longer get a sore back when I go for a long walk, or climb hills. Previously it was quite debilitating how sore and stiff my back would get from walking, so much so I would never go for walk.

Since the series I have done lots of long walks, including 25-30 kms in a day and have had no back pain.

I also used to get back pain from standing for extended periods at a concert or sports event. This is no longer there.

I have not had a stiff neck for a year since the series, and my experience of living within my body, of choosing to sit or stand straight because it is easier and more comfortable.

The practitioner recommends a series of sessions every decade, and I would agree with that, as it is such a comprehensive physical straightening that you would want to have it as a support to continuing good posture.

It is a really thorough treatment, one I had promised myself many times over the years, and am very grateful to have done the series. I highly recommend it.

My then-wife and -pre-teenage stepson did the series and it also had a marked effect on their relationship to their bodies also.