Congratulation! your data has been updated.
Jokes / Sexual Jokes / Nathalie The Prostitute 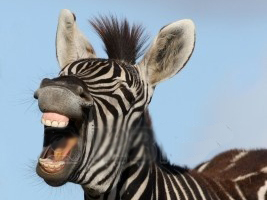 The madam of a brothel in Melbourne answered the door one night to find an old distinguished man standing on the door step. “How can I help you?” she asked.

“I want to see Natalie,” replied the guy, with a polished English accent.

“Excuse me, but Natalie is a very expensive lady. Maybe you might like to choose another woman who is less expensive?”

“No, I really want to be with Natalie” replied the old man.Natalie soon appeared and told the old guy that her fee is $1000 an hour. Immediately, much to her surprise, he pulled out his wallet peeled off ten $100 notes.

Natalie and the old guy went upstairs and after an hour the guy returned, smiling and left quietly.

The very next night, the same guy appeared at the front door of the brothel again, asking again for Natalie.

Natalie was a bit surprised, saying that no one had ever come two nights in a row and that if he wanted a discount forget it as her fee was still $1000. Once more he took out his wallet, peeling off the required notes and the two of them went upstairs again.

Just under an hour later, he came down the stairs and quietly left.

Everyone was amazed when he showed up the next night again. Once more he asked for Natalie, gave her the money and they went upstairs again.

After the hour was up, Natalie asked him. “Nobody has ever come to see me three nights in a row before. Where do you come from?”

“Is that right?” Natalie said. “Well, I still have some family living in Perth.”“Yeah, I know,” the old man replied. “Your mother recently died and I’m your brother’s lawyer. He has instructed me to find you and give you $3000 from your mother’s estate.”