Congratulation! your data has been updated.
Reviews / Aura Soma

I had never had a purely Aura Soma session so I was very curious when I arrived for my session.

The therapist said that we are attracted to certain colours that we see outside of ourselves which reflect something we don’t ‘own’, and that by choosing this or that colour and ‘taking it in’ we can reclaim that energy we are in a kind of denial about.

Have you ever had an Aura Soma session? Or got something to say about this review? Leave your comment at the bottom of this page.

At this point I became aware that I was seeing, or more accurately, feeling, all kinds of colours.

Firstly we went into the session room and there against one wall was a beautiful array of bottles full of coloured liquid. Nearly all had two colours, one above the other.

The order in which I had chosen the bottles was significant, as each colour combination was in a particular position, again like Tarot cards. Different colours resonate with different emotional and spiritual states, and I was able to relate easily with what she spoke of.

After some time I lay on the table, and after doing some energy work around my body she produced first one then the remaining bottles for me to really tune into, to merge with and to ‘take into my body’.

This Aura soma session was very esoteric which I enjoyed as it reminded me of being in India. It was beautiful to be taken on a kind of personalised guided meditation, and being able to tune into very delicate internal states. 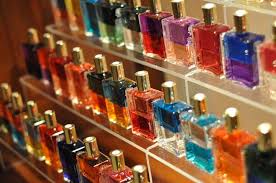 Different things appeared for me, as they do when entering these super quiet spaces, and somehow tuning into the colours that were held in front of my eyes relaxed any tensions I had about feeling these things.

After some moments I would be told to close my eyes and let it go inside.

These moments I really liked, and was surprised by a sudden tiredness, always a signal to me of my unconscious being afraid, of feeling or letting go of old issues.

In these moments I would find I was filled with colour, sometimes the one I had been looking at, other times its opposite hue.

At the end of the session I lay quietly for a while then we spoke of the experiences we’d had.

In loving memory of the therapist, Nura, who gave me this session, who died in 2014.