Congratulation! your data has been updated.
Articles / World Affairs / Yes We Must! A Response To Barack Obama 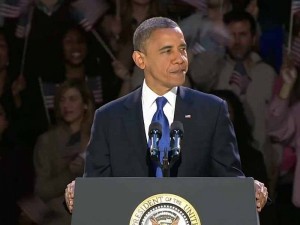 Over the course of the 2008 US [world??] presidential campaign and the democratic primaries beforehand, I often found myself in tears as I watched Obama’s speeches on the internet or on TV.

Again and again his words struck a chord very deep inside of me, more perhaps than was appropriate given that I am Australian and he is, after all, a very smart American politician—a species generally just slightly to the left of pythons on the evolutionary slide rule.

An emperor with clothes on

But this was not a US election with ramifications confined to US borders like elections in most other countries; this was the election of the emperor, and for once ‘we’ had an emperor with clothes on.

‘Yes We Can’ struck chords that no avalanche of ‘No You Can’t’ or ‘No You Shouldn’t’ emanating from the other side could quell, and lit a fire in the soul of not only America, but the entire world.

How long has the world waited for this articulation of humanity’s dream of living intelligently and compassionately with one another?

Having seen what bad news a bad US president can be to the world, now the world is buoyed by the possibilities of Obama who has spoken so eloquently of justice, of humanity and of compassion, of engaging with allies and would-be foes alike.

I distinctly remember the dark sinking feeling I felt in December 2000 when ‘W’ stole the election with the Supreme Court’s assistance, the dread of the wars that I and many friends could perceive over the horizon and the reverse gear that policy worldwide would be thrown into.

Similarly I remember the depression that descended on me in 2004 when despite the obviousness of the catastrophe of Bush’s he was re-elected.

I thought Australians were stupid, but man, doesn’t anybody in the US care? Was nobody paying attention to the litany of anti-humanity changes he wrought on the US and the world? Hello, was there anybody home?

It occurred to me watching Obama’s victory speech with tears rolling down my cheeks, that this moment would never have happened if Kerry had won in 2004, that it had taken the pain and despair of yet another corporate media-led theft of the presidency for the US populace to get motivated for change.

Perhaps Obama’s primary victory also came from the failure of a quasi-liberal, business-as-usual non-Bush like Kerry, and that people understood that even if Clinton was elected little would change.

What was actually needed was a new broom, a new paradigm.

Obama’s election reveals that the current (up to now) political paradigm that we have seen grow over the last years, fed by the Fox minions creating division wherever they could, what has been called ‘Rovian’ politics, is dead, or at last lying in a coma waiting for life support to be switched off.

Again and again the smear tactics Fox and the GOP used during the campaign failed to gain traction as people, tired of the status quo, tired of being talked down to, tired of being told what to think, saw a different kind of promise in Obama and who he appeared to be.

Eighty million people came out to vote for a black man to be the US president—to me America clearly stated that the old paradigm of division is dead, and that there is life left in the founding principles of such a great nation that has lost its way.

People are sick of the wars, the scandalous financial system that enriched a few and left a tab to be picked up by generations of future citizens, American and otherwise.

People are sick of the health care systems that do not work, a military gone mad, and the propaganda of division of the Right. They recognise in Obama’s words of unity their biological imperative that insists on a life worth striving for.

Obama often said that this campaign was not about him, that this victory was not about him. It was and is about the people who choose to dream over surrendering, hope over despair, who, finally after decades, even centuries of abuse, of being downtrodden, or being neglected, of having freedom on a leash, were able to shout from the rooftops, YES WE CAN! make this world a vehicle for our deepest longings.

It is clear by how Obama is shaping his cabinet that he meant it literally when he talked of leaving behind the old divisions of Left and Right, and that he was not a secret leftist who’d sweep the non lefties from the halls of Washington.

It may be that Obama fails to live up to all, or even any of the massive expectations heaped upon him. But this actually has no bearing upon the basic message that inspired citizens of every colour, religion and nation on the earth.

Yes We Can still remains true, it still beats in millions of hearts and echoes around nations that pulsed with life such that the giants of history could never have imagined. It is up to each of us to manifest this in out own way, using our own light.

I was recently in a meeting with our new website designer, and we were hashing out some details over various aspects of how we wanted our working relationship to look.

I said that I wanted an ‘Obama business’ relationship with him. What I meant was that I wanted for us both to drop the paradigm of ‘I must put my business first,’ which translated into me always aiming for the best deal for my business.

Such an oldstyle attitude is not necessarily the best outcome in terms of our long-term sustainability and therefore may not be ultimately the best deal, longterm, for us.  Yes we have to look after our bottom line, and there is no problem with that.

But in the same way that Obama showed us we are not different or separate from each other (he connected with the whole country—the whole planet—by drawing the connections, by demonstrating the human thread, between African Americans, Hispanics, struggling white farmers and factory workers), so too is my business connected to yours.

My success really only means something if both our businesses do well, and also by association my community, my planet.

Sure, I can run my business in isolation, like Walmart, Aldies, and make lots of money, but that is not helping my community, that is not providing meaningful employment so people have money to buy my products, that is not supporting other businesses to provide jobs, nor is it making the streets safer because people have futures to look forward to, to lives they want to build.

It is also not providing a dignified life for the boys and young men who may or may not be my daughter’s boyfriend, or who I may walk past one night in a dark street.

There is a false economy to the particular economic rationalisation paradigm that we have been living in, the ‘my bottom line first’ approach.

For example, I can squeeze my suppliers for every dollar, and it may be that others do the same thing because of the current economic climate, and before too long the supplier has to fire the worker that performs the basic bottom-of-the-rung type duties.

However, it may be that when I ring with an urgent request, the person who I need to speak to right now to fix my problem may be busy on an errand or some other task an underling used to do.

Like this, my problem snowballs and becomes much larger and cost me far more than what I saved by squeezing some previous time.

It occurred to me sometime after the victory speech that the real gift of Obama may be already under our Christmas trees— Yes We Can. Maybe what this moment requires, is not for a messiah to come and make it all better.

This is a danger for Obama to be seen in this light, and his victory speech showed his understanding as he tried to hose down expectations of all those who heard this message, who chanted YES WE CAN, who felt the tingles in their spine, whose tears rolled down their cheeks when they heard him articulate dreams long buried in some utopian landfill, to take it into their own lives.

For teachers, to do what they can, for students to give it a go and to support each other to give it a go, for men and women, parents and kids to try a new way of relating.

Of course, once we embark on this we will be drowned by the ‘No We Can’t’ paradigm rearing its ugly head—so great determination will be required. We will need much grounding in realities political and physical, lest we drift off into utopian dreams and the rude awakenings that usually follow.

The risk of us personally not taking on board Yes We Can is that if Obama fails in what he is trying to do, so will we. It will knock the stuffing out of us for decades to come. And the danger of that, is that our society—our planet—may not have decades more to fiddle.

If we take ‘Yes We Can’  on, live from it, work by it, and participate through it, we are guaranteed that the transformation we have imagined through our tears will happen.

We cannot leave such a grand vision up to one man, and Obama is a man who needs as much help and support as possible. Already within days of his victory speech when he broadcast over the internet his first ‘fireside chat’, he looked like the demons from every hell had descended onto him along with the downloads from countless official briefings.

Obama needs our support, our backs bent to the wheel, and perhaps above all, our willingness to do it ourselves.