Congratulation! your data has been updated.
Articles / Meditation / Peacefulness In A Bowl Of Tea 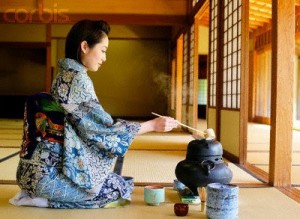 Sandra Kimball discovers that after drinking tea, there is nowhere to go but home.

Acting naturally, gracefully and spontaneously in whatever task one performs is at the core of training in traditional Japanese arts.

When diligently following strict patterns or forms that must be repeated thousands of times, we untangle from the mental preoccupations and entrenched habits that cause us unhappiness.

We develop sensitivity to the relationship we have to each other and to the flow of nature. It is accepting the world and ourselves as it is.

The traditional art of tea, or Chado, is learning to put others first as a way to break our habitual tendencies toward self-centredness.

I found my way into the tearoom in 2003 and became part of the International Chado Institute, a small group of non–Japanese students from various cultural backgrounds who meet at the Urasenke headquarters in Kyoto, Japan.

Each week for more than five years, my legs aching from sitting in the traditional position on tatami, I merged into this collective and noble enterprise to concentrate my mind to the details of making and receiving tea.

It may sound boring and at times it was painful, yet with each slow and clumsy effort I made toward refining this ordinary ritual in a simple setting, a quiet revolution was occurring within.

By conscious participation in whisking powdered green tea into an elegant and carefully warmed ceramic bowl, I noticed that a new aesthetic and appreciation for beauty and meaning was emerging and affected how I participated in the art of living.

Chado, the Way of Tea, was introduced to Japan from China as early as the 9th century.

Known mainly for its medicinal qualities, it was cherished by Zen monks for its capacity to relieve drowsiness during meditation.

Its popularity extended to the members of the aristocracy who routinely spent their leisure time at elaborate and boisterous tea gatherings that included dice games, gambling sessions and wine drinking bouts.

In the 16th century, tea master Sen Rikyu incorporated the essence of his Zen experience into the custom of tea making and brought it to a high level of development.

For 400 years, Chado has been nurtured and refined by the diligent attention given by the descendants and disciples of Sen Rikyu.

Today there are more than two million people studying Chado in Japan and throughout the world.

I admit I wasn’t a very good student.

It took a while to get familiar with a teaching method where silence is held in high regard, you must attune to the atmosphere at the moment and you don’t ask too many questions.

Most of my colleagues readily accepted the invitation to immerse in the philosophical, religious, artistic, moral and social aspects that form a comprehensive synthesis of Japanese culture imbedded in the study of the Way of Tea.

The appeal for me was to practise in the way to foster a growing spiritual quality to my life. When the doors to the tearoom slide closed, we cast aside the cares and worries of the outside world.

I found I began to leave certain troublesome personal tendencies behind until eventually, I noticed they weren’t waiting for me when I returned.

Gradually, self-criticism was replaced with self-examination and within the mass of blunders I committed I found the hidden value of learning from my mistakes.

A clear understanding of our inner world is of utmost importance to live in congruence with our beliefs and attitudes.

Wa Kei Sei Jaku (harmony, respect, purity and tranquillity) are the reflections of the pure spirit and soul of Sen Rikyu that we endeavour to integrate into our daily lives.

With continuous practice, these principles become an individual and idiosyncratic living expression of the heart.

There is a peacefulness that comes from keeping the body and mind in one place. In the tearoom, memories from the past that deliberately caused me to escape from the present moment were replaced by a sensitivity to the rhythm of posture, movement and breathing that flow with the natural surroundings.

My impatient nature would sometimes pull me out of sync with following the form but eventually, the pounding surf inside became the slow bubble of the kettle; the steady strength of internal heat was the warmth of the bowl in my hand.

In the flow of the composed interaction between the host and guest, a broader meaning of harmony was revealed to me.

I started to look closely at what I was willing to change to get my relationships in order.

It meant paying attention to close friends, friendly neighbours and supportive colleagues to discover what binds us together.

We are creatures of belonging and when effort is made to strengthen our relationships we are less likely to experience loneliness and sadness.

The strict adherence to a form where everyone is equal is a means of incorporating and internalising the spirit of respect.

The paradox is that when studying in a hierarchical system, there is a tendency to compare ourselves to others.

Appreciating the strengths and artistry of another person by overcoming the fear that their special qualities somehow diminishes our own clears the way for us to make it a lifelong habit to find the beauty spot in everyone’s life.

It challenges the anxiety that there is not enough to go around in this world, whether it is talent, money or status.

Respect fosters generosity and we soon notice that every second offers the choice to either offer or withhold it.

Preparing to serve by having everything clean and ready is a sign of appreciation not only for the visitor but also for the precious utensils one uses, the scroll and flowers that inspire and calm, and the aesthetic simplicity of the natural surroundings.

One time, my job to make ready for a large tea gathering was to bend down and individually pick up the autumn leaves on the pathway leading to the teahouse.

I was tightly and uncomfortably trussed in a borrowed antique kimono worth more than my entire lifetime wardrobe.

Each leaf became an opportunity to internally clear away a less than enthusiastic attitude and to liberate the negative emotions that arose in my discomfort.

Purification through total concentration led to positive thinking and a soft-focused optimistic attitude replaced the feeling of being stuck and helpless.

Having the perspective of being ready to receive a guest has stayed with me.

A bemusing by-product is that I’m now a better housekeeper, more conscientious of keeping my personal space ready and welcoming not only for others, but also for myself.

In a heart that is set free there is tranquillity.

This is not a dreamy, irrational state of mind, but the recognition of the dynamic force of a heart that is peaceful yet remains alert.

The search for freedom from the illusory safety net  of materialism; money, fame and image is called off.

Materialism, which leads us to be overly devoted to our individual concerns, comes with a high price for it gives rise to more depression, less enthusiasm and the suffering of more physical symptoms.

Life is a constant cycle of settling into a comfortable place, only to be called away to courageously face the unknown.

Once we give something our full presence, it’s on its way out.

In Chado, the special nature of the moment is expressed in the phrase “Ichigo, ichie” – for this time only.

We’re lifted out of our usual experience, our busy minds become still, and we treasure the transience of the moment with the guest and a tea bowl held in the palm of our hands.

Sandra Kimball returned from seven years in Japan where she was a counsellor for the foreign community.  She has a private counselling practice in Byron Bay and still loves drinking tea.