Congratulation! your data has been updated.
Articles / Personal Activism / Losing the plot and loving it 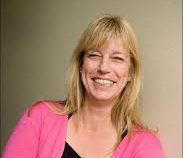 Everything I need to know about life I can learn from Michael Leunig. I met the man on his recent visit to Byron Bay and his teapot philosophy made more sense than ever before.

With confidence I can throw away those dusty self-help books propping up my bedside table and give Leunig’s Book of Poems 1972-2002 pride of place.

It’s all I need to relax while losing the plot and loving it.

‘He’s lost the plot,’ they say
But it simply isn’t true;
You cannot lose the plot,
It’s stuck to you!

Nor can it be chucked out
Or thrown into a pit;
You can’t just dump the plot,
You’re stuck to it!

But you can soak the plot
And loosen it with tears
And slowly peel it back
It could take years.

I met a man perched on a bottle
With a woman deep inside,
Rising slowly up towards him,
Floating on the tears he cried.

Said he, ‘It’s only tears can save her,
Tears of sorrow, tears of pain.
I’m going to have to feel a lot,
Until I have her back again.’

All sniffling and snuffling,
He said, ‘It almost makes me laugh
To think that if you weep enough
A man can find his better half.’

Mr Rabbit came to Australia with his wife
To raise a family and make a brand new life.
‘Let us rejoice for we are young and free,’
He said while touching Mrs Rabbit on the knee.
They rushed ashore and quickly dug a hole,
Then lay down side by side and lost control. 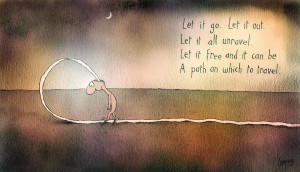 There is a missile, so I’ve heard,
Which locks on to the smallest bird,
Finely tuned to seek and kill
A tiny chirp or gentle trill.

It’s modern warfare’s answer to
An ancient wisdom tried and true:
When fighting wars you first destroy
All songs of innocence and joy.

Let it go, let it out,
Let it all unravel;
Let it free and it will be
A path on which to travel.

I see Michael Leunig treading his own path with deliberate and reverent steps. His humility is a reminder of how genius and ordinariness are such perfect bedfellows.

His ability to speak openly about his own thought processes and give his opinions about spirituality, the war and the duck touched all who met him.

Talking about Byron Bay he said, ‘Byron is a peculiar place, there is a lot of personal development and professional development, I’m never sure which is which.’

Singer Gyan, who sings Michael Leunig poems on a CD entitled Billy The Rabbit, described the night at the community centre with Leunig as a pinch-me-moment.

I want more pinches and more of Michael Leunig.