Congratulation! your data has been updated.
Articles / Meditation / The Lake Of Silence

The Lake Of Silence 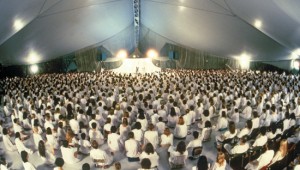 The Lake Of Silence

A story about the Osho Commune in Pune, India, by Mark O’Brien

I spent much of 1988 and 1989 at the Osho Commune in Pune India. I spent a lot of time meditating, sitting in discourse with Osho, sometimes up to 5 hours a day, a massive stretch for any seasoned meditator, least of all someone generally as restless as me.

I also spent lots of time painting t-shirts and doing various other things trying to earn my living, going to parties, having some fabulous meetings with women, basically having a crash course in finding my way through the minefields of the spiritual search.

There were many literally mindblowing moments, hours and days there.

Here I will describe one. I will first describe the general tone of the discourses to give a bit of flavour.

In the last 18 months of Osho’s life he was speaking on Zen.

The discourses happened in the newly completed Buddha Hall, a vast marble platform with a roof of vinyl stretched over a Sydney Harbour type steel arch while the sides were simply mossie nets draping to the floor.

It was beautiful, polished most days and mopped twice a day after the various meditations that were held there each day. 2-3000 of us, all freshly showered and dressed in white robes, would sit on our cushions in silence waiting for Osho to come, with some gorgeous music played by the band of the day.

When at the appointed time Osho’s car would drop him off at the hall entrance, he would enter the hall and do a little dance with us while the music would climb to various crescendos, until he raised his arm and the music would stop and we would all freeze momentarily before he sat down.

He would sit and then one of his disciples would read out a story of some Zen master speaking with his disciple.

Then he began talking and would keep talking for the next hour. Sometimes passionate, sometimes slow and hypnotic, always engaging.

Once he completed what he wanted to say he would read out some jokes to get everyone laughing, as ‘it has gotten too serious”.

After loosening us up like this, then he gave the signal for everyone to start talking, or yelling, gibberish.

The music was going again, and the energy in the hall was mad, frenetic.

The purpose of this was to empty the mind of all the thoughts and tension accumulated during the discourse.

Again, at a certain point, he would raise his arm and everything would stop.

After a few more minutes he gave another signal, to let go, and we would all fall back onto the person behind us, again, in total quiet.

In these two periods, in actuality guided meditations, Osho would speak, urging us to go inside, deeper and deeper.

After a few moments of this he called us back, reminded us to remember this silence as being the silence of the buddhas, and to take it out into our world and make it a part of our day to day lives.

And then he would get up to go, the music would play and we would all dance again, and he was gone for another day.

This format did not change much for his last 18 months, but it never lost its freshness.

In the guided meditations Osho often referred to ‘the lake of silence and consciousness’ that was being created daily in Buddha Hall, and after some time it became that whenever I sat down of an evening waiting for him to come I would slip into this feeling.

It started happening that during discourse, which was always silent but by now was an exaggerated version, that in my own silence I was able to tune into the collective silence of 3000 people in deep meditation, and I was able to actually hear other people’s thoughts.

This was quite strange, but it I would hear some thoughts coming from over that side of the hall, some from closer, some from the left etc.

I had such an experience of this lake of silence that I felt any ripples in it, and I used to just love drowning myself in this lake every night.

I remember feeling so blessed, so lucky, that I was able to be there, in that hall, every night in whatever it was that was happening.

It is a silence that is neither inside or out, that is neither dependent on my having a quiet mind or noisy one or of the environment being quiet. It was mine, which of course Osho had to remind us of many time, something that cannot be taken away from me.

Mark O’Brien visited the famous Osho Commune for the annual July festival in Rajneeshpuram in 1983-6, and later spent 6-7 months a year in the last years of Osho’s physical presence in the Pune, India, commune over 1988-89, plus two three periods there of similar time from 1992-98