Congratulation! your data has been updated.
Articles / Indigenous / The Dreaming Festival 1 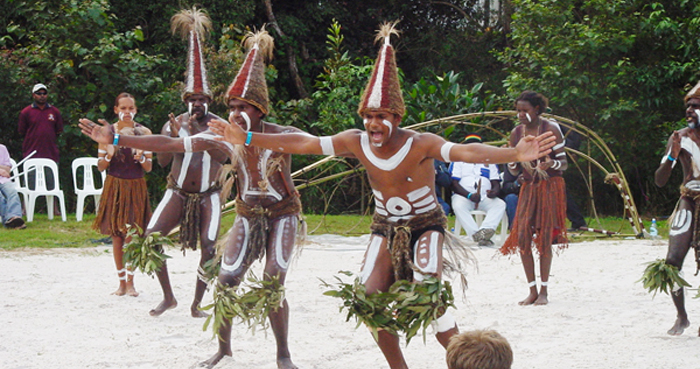 I was quite determined to go to the inaugural Dreaming festival held over the Queen’s Birthday weekend, 2005, run by the Queensland Folk Federation at the Woodford festival site.

I brushed off the heavy rain falling in Mullumbimby over the two nights prior to the festival and headed off ‘on a wing and a prayer’, arriving to find the rain had stopped, to reappear briefly that night and then disappear for the remainder of the festival.

The first thing I noticed when I arrived was the absence of massive numbers of people and the ease in which a campsite close to the festival could be found, and a sweet feeling of anticipation in the air, anticipation of something special and hitherto unknown about to happen.

I myself felt inspired, already grateful, and was happy to read Queensland Folk Federation’s (QFF) Bill Hauritz’s introduction in the program:
Our organisation promotes the notion that it is intangible knowledge, our lore, that we carry in the deepest part of our being is that which sustains us.

The exploration of that culture, and the expression of it we think is critical to the development of our wellbeing… The focussing on the problems of indigenous Australians struggling to maintain their very being in our Westernised culture has diverted our energies and heightened our arrogance.

We are not allowing ourselves to listen and learn from cultures which are about as old and as beautiful as it gets.

To begin with, indigenous people could show many of us how to create extended families, teach us how to know and love our cousins we’ve never met, create mind altering art, and how to create love that doesn’t change with acts.

We hope that The Dreaming will be a vehicle from where we might listen and learn from some of the finest cultural expressionists in the world.

We hope the benefits for each of us and our nations will be enormous and we hope that this vehicle will be overloaded with laughter and joy.I’ve been to the Woodford festival at the same site four times and am very familiar with that festival, so was very surprised to see the lay of the land, with approximately a third of the usual site used and laid out differently, with a large open-air dance stage, the Dancestry, in the heart, a heart that was to pump and renew the festival-goer again and again over the four days.

Not a lot of venues, just eight, with just one larger music tent, a smaller one (perhaps 600 seats) for music and theatre and several small ones for talks and music, with many fireplaces scattered around the site.

The comedy club was busy with lots of funny bones being tickled, and the cinema tent and the galleries were full of quality indigenous film and art respectively.

There were many famous indigenous performers, speakers and artists. It was great being at such a beautiful festival, with everyone that I met touched, grateful to be there, to be a part of the beginning, and full of peaceful feelings.

It was an older crowd at The Dreaming Festival 1 than what is mostly prevalent at Woodford with perhaps not so much on offer, this time, for the younger crowd, not so much partying.

The organisers only decided to put the festival on six months ago, and director Rhoda Roberts, the woman behind the opening ceremony at the Sydney Olympics, did a fantastic job pulling in a richly diverse and talented array of indigenous performers, from all over Australasia as well as North America.

It was such a simple festival, with the closing ceremony typical.

It was not a particularly spectacular event, but when the crowd stood up when George from The Warrumpi Band requested people stand up for indigenous rights, many a tear flowed, and to me it felt like at long last the Australian people are coming together to sort out Indigenous/European issues.

Issues like reconciliation, the apology for the stolen generations, land rights, and it does not ultimately matter what little politicians do or not do.

As an Australian who has had very little to do with indigenous Australia but who has intellectually understood the apparently convoluted nature of indigenous affairs, I was most touched by the goodwill and the heart of what I felt in that moment.

Yes it is doable, yes it can be achieved, yes we can see each other, yes we can … [Editing this in 2014, I can see the humanity-wide catch-cry origins of Obama’s Yes WE Can slogan.)

My sense was that this feeling was a common one amongst those that were there, and that this festival has struck a chord that is long overdue, and that as each festival grows upon what came before, it may serve our society in ways we cannot imagine.

To that end I wish it well, and heartily recommend to anyone to gather their tents and head to Woodford next June.

It was a fabulous time for kids also. Our kids went off witchiti grub hunting with an Indigenous man and returned some time later with a handful, though baulked at eating them even after they cooked them. I wasn’t that brave either.

They loved the dances, and could always be found sitting at the edge of the Dancestry ‘stage’ or engrossed in conversation at a stall. It is a great place for kids as they can wander safely, and have their own experience.

I heard of a little girl getting lost, and being cared for around a camp fire while word went out and the mother was found.

There were lots of things to do and see, although I mainly needed a holiday and found myself just wandering around. I saw perhaps just eight shows other than the traditional dance performances that seemed to be always on.

My favourite shows/moments were Richard Franklin’s The Charcoal Club and The Chamber Made Orchestra, music for ‘burnt out blacks and singed whites’, a musical and multimedia performance that blew my mind, and Seedz, the internationally acclaimed Garrabarra [contemporary] Dance Company’s production, and the closing ceremony.

For sure it will get bigger as the years go by, but my sense is that it will also get richer, and I for one will find myself going to Woodford on the June holiday weekend.

[Yes, it got richer, but this particular festival held a magic, a purity, that everyone who was privileged enough to be there, will treasure.]

A couple of pointers re camping

Air mattresses are freezing if in contact with the earth, so bring cardboard or lots of newspaper to put under the mattress. There are hot showers which was just great (thanks QFF!) for those cold mornings. All in all it was a great holiday.