Congratulation! your data has been updated.
Articles / Personal Activism / Confessions Of An Economic Hit Man, A Review

Confessions Of An Economic Hit Man, A Review 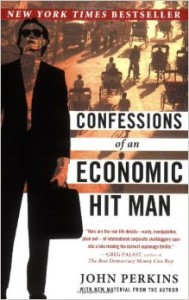 Confessions Of An Economic Hit Man, A review by Mark O’Brien

“Economic hit men are highly paid professionals who cheat countries around the globe out of trillions of dollars.

They funnel World Bank, US government, and other foreign ‘aid’ funds into the coffers of international businesses and the pockets of a few wealthy families who control the planet’s natural resources.

Their tools include fraudulent financial reports, rigged elections, payoffs, extortion, and murder. They play a game as old as Empire but one that has taken on new and terrifying dimensions during this time of globalisation. I should know; I was one.”

Confessions of an Economic Hit Man (It reached number 22 on the NY Times Nonfiction bestseller list as of April 17, 2005) is a riveting and utterly shocking book about the clandestine tactics the US government and corporations have been using for years to enslave weaker third-world countries for monetary and political gain.

John Perkins’ jaw-dropping true story of his life as an economic hit man (EHM) could have easily been a best-selling fiction novel on par with any of the popular conspiracy thrillers written by Dan Brown, Tom Clancy or John Grisham.

Except for the fact Perkins’ story is not fiction. It’s all true.

In this book, Perkins shares how he was hired by a consulting firm where his job was to create bogus economic reports on how selected third world countries would benefit from borrowing huge sums from the US government for infrastructure development.

After Perkins convinced the leaders of these third world countries to accept loans, the consulting firm, in concert with US development corporations, would make billions on the infrastructure work financed by US taxpayers.

Once these countries were deeply in debt, the United States essentially owned them, enabling it to take over their natural resources (i.e., oil) and forcing them to become political and economic slaves.

For 10 years, Perkins travelled the world over — Indonesia, Panama, Ecuador, Columbia, Saudi Arabia, Iran  — and convinced the leaders, like Panama President Omar Torrijos, to go along with the massive borrowing from the United States.

This is just one small example of the underhanded tactics EHMs used in order to further US imperialism. If an EHM could not accomplish his or her objectives, the established protocol was that the jackals (the CIA) would be sent in to finish the job by arranging for the unyielding political leaders to die in fatal plane or car accidents and have the leaders replaced with US puppet-politicians.

Confessions of an Economic Hit Man describes the behind-the-scenes intrigue of historical events such as the fall of the Shah of Iran and the invasions of Panama and Iraq that were never about ‘restoring democracy’ as the government and press would have you believe, but were all about removing leaders who stood in the way of the goal of US globalisation.

As you can imagine, an explosive expose such as the one described in this book is very threatening to those involved in the clandestine EHM world. While Perkins was writing the book, he had many monetary bribes and death threats to persuade him not to publish it.

It wasn’t until the terrorist attacks of 9/11, when the general sentiment of Americans was one of shock and horror that terrorists could wage an unprovoked attack on an innocent country like ours, that Perkins knew he had to step forward with his story to help Americans understand why the US is not a popular country all over the world.

One thing Perkins makes clear though is that he does not believe there is a conscious conspiracy to the machinations of those loans, that there is no overaching authority that directs this or that.

Googel John Perkins, there are some great talks he has given over the years, which caste a very unique light on day to day events.