Congratulation! your data has been updated.
Articles / Mark's Blog / A way around kids’ tantrums

A way around kids’ tantrums 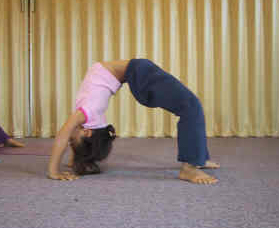 A way around kids’ tantrums

There is a way around kids’ tantrums, and it can be simple, according to studies of various yoga postions.

We all know that exercising can change your mood, make you feel better, and that different exercise does different things.

Runners, swimmers, game players, all do different types of activity and have a different psychology also, and usually they will all report feeling much better after exercising.

Some time ago I was reading about a study done on yoga and how various postures affect ones mood. What this study discovered was that the most effective mood changer was a posture where the back and head were arched back, as if rolling on a ball.

Given my background, immersed as I was in parenting issues while publishing  byronchild/Kindred magazine, I wondered if this might be useful for parents to know, but wanted to see if it worked.

So I told a Balinese mother about this when her 18-months-old son got into one of those ‘moods’ that toddlers are famous for and suggested she try it out over the next week or so.

While not exactly at her wits’ end (Balinese women tend not to ‘do’ wits end!) she was very happy to give it a shot.

I did not see her for a week and then she came to me beaming and very grateful because it had really worked, and she had rapidly been able to change things when her son got into one of his moods.

What she did was she simply cradled her boy and slowly manoeuvred him onto his back, and then gently let his head go while helping him extend his spine.

This seemed really good, and her son quite liked it, as well as being a simple and connected way of short circuiting at least some of those little power struggles that can exhaust mums.

There are lots of yoga programs for older kids (see the Kindred website) and parents who can get their kids into it are appreciative.

See also 11 steps to a better brain – the body on this website for the original research on this.