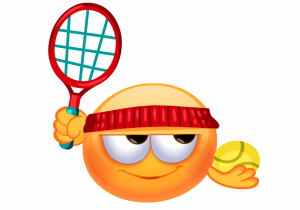 Do you like playing tennis and want to go a bit deeper into it? Dissatisfied with the lack of connection with the person over the net? Want to combine your love (of tennis) with meditation, and work on your relationships at the same time?

Over a period of a year when I was teaching tennis at the Osho ashram in Pune, India, I discovered a form of discipline, of meditation, that I called Tantra Tennis.

Zennis was the name given to tennis in the ashram, but that felt a bit contrived, as to me tennis was rarely Zen and Zen was anyway a bit dry where tennis is colourful and emotional.

For me tennis is about engaging, wanting to be engaged with what you’re doing. Much of the tennis I had experienced had been about winning or losing which has a certain tension around it.

Some skill is of course needed to engage in this way, to be able to hit the ball back a few times, to have a choice about how and where to hit, and levels vary, as with anything we do.

Moving out of the desire for achievement, or failure, into simply being with the other in a Tantric space, in a space of giving and receiving, the dance, is to me what Tantra Tennis is.

Osho’s No Dimension meditation (adapted from 4 Directions meditation), when done with tennis racquets, can really bring home in the body the dance of tennis.

I was doing this meditation daily, and found myself experimenting with different actions, mostly martial arts movements, like Tai Chi, and watching my own feeling as I did it, and decided that it would be great to try with a racquet.

This is about playing tennis without the ball or the other, a tennis Tai Chi.

It was great, and I found that my sense of rhythym, my feet positioning, my balance before, during and post contact with the ball all improved markedly after even one meditation.

Those who participated when I facilitated this meditation loved it, and their tennis improved quickly. For anyone into tennis, it is really great, a fantastic way to get your body positioning and movement sorted.

(The No Dimensions meditation music CD is available from here. Do the meditation as directed 4-5 times so you get to know the rhythym of it, then another 2-3 times playing backhands and forehands without a racquet, then introduce a racquet.)

So what is Tantra Tennis?

Being who you are in this body right here and now. And watching. And sending, and receiving, and holding back, and scared, and powerful, and alive, and agile, and paying attention, and learning how to “play” tennis.

Being who you are, seeing what wonderful dramas you can make out of trying to hit a ball!

See if you really wanna bury your opponent, your mother, your father, your rival, your partner, your friend under an avalanche of powerful or sneaky shots, or does your joy lie in the here and now, the exchange, the exposure, the sweat, the breath?

This of course you can do with anything, but tennis is such good fun! To me tennis is totally natural. I started playing, according to my siblings, when I was 4.

And what works best on the court is what is natural, the natural, healthy way to move being the most effective, harmonious.

In a way I uncover the natural tennis player who quite simply loves the ball, who enjoys receiving as much as s/he likes sending, hitting.

My main focus in a Tantra Tennis session is to bring the whole awareness to the point of contact with the ball. That is, watching the ball right up to the time it hits the strings.

For most people this is really difficult. It seems impossible, even undesirable, to take your attention away from the other, and from the other side of the net where you are attempting to hit the ball.

Most people when they learn how to play soon think that they don’t have to watch the ball so carefully, peripheral vision deemed enough.

The thing is though, if you aren’t watching what is happening at the point of contact, you don’t really know exactly what it is that you’re doing.

And if you’re attention is not fully with what you’re doing neither is your energy, so if you want all of your energy available, then you have to watch.

If you really watch then it sets up a bio-feedback loop so your brain learns on its own what works and what doesn’t.

Perhaps you are hitting the ball too far out in front, or too close to the body, too far away, too far behind, especially when you are excited, which can throw the whole balance out.

In all our endeavours, there are habits and patterns which may or may not serve us as we try to be here and now.

The point of contact, in tennis easily seen as the moment of hitting the ball, and in life when we meet another, a loved one, an enemy, is in other words our interface with all of life.

I observed firstly in myself and then in lots of others, that the ability to watch at this point varied from forehand to backhand, which made me look very closely at what these differences really were.

I saw that for most the forehand was the easier, more natural, the safer, more secure stroke to play.

It’s the stroke that we learn to use first, whether it is as a baby when we reach out to touch our mother, or to hit our playmates.

With the tennis forehand it is about opening up the body in the backswing, and then closing it with power to hit the ball.

Most of us try to bring this same energy to the backhand, but it never feels right.

With the backhand we close the body for the backswing, coiling the energy, and then when we hit the ball we open it up, recoil, a more open ended stroke.

On the backhand side I noticed that I needed to be more receptive, more willing to receive. This produced feelings of vulnerability, which anyone who has ever played will relate to, if asked.

Someone’s hitting the ball to your backhand and immediately some discomfort is there. “Oh no, he’s hitting it to my backhand again. Doesn’t he know I don’t like that? My backhand is so unreliable!”

So many movies are there about this simple ball coming to that side.

One day it hit me that the internal movies I saw I was running around my backhand were judgements of the female by the archetypical male mind, and that the forehand represented the male.

The forehand with all its power, control and aggression, along with the delicacy, unpredictability, the wildness of the backhand.

I was able to see in myself and others how the inner man and inner woman were doing.

It is clear that everything we do is a blueprint of who we are, and tennis is a fun way to see who we are, today. Any emotional charge in any given stroke is clearly visible, and digging just a little will locate the root.

In Tantra Tennis, rather than trying to supplant a new pattern over old ones (which I find is a bit useless as whenever there is a stressful situation the ”old” will reassert itself), attention is brought to what is, to what is felt, and the energy of that feeling is released and included, owned.

Not all patterns are easy to feel, or comfortable, so it doesn’t happen all at once, so as with any “self work”, it takes vigilance and patience, and a willingness to look.

Hence Tantra Tennis, where everything we are is included. Sexuality, anger, fear, vulnerability, uncertainty, insecurity, love, humour, everything.

When I watch the very best players, Federer, Nadal, they all watch the ball till contact. This you can see in any photo of them. This shows that they are totally concerned with the ball, nothing else exists.

Australian player Patrick Rafter was someone who had great trouble watching the ball onto the strings, especially with volleys which were his speciality. I get that is reality he was playing volleys with zero time, stretching, but he was never on top of it, in command.

In every action photo I saw of him playing a volley his attention was midway between the ball and the opponent.

I believe that one of the reasons he never went all the way to number 1, was this inability to forget about the person on the other side of the net.

I take the point that with Agassi or Sampras on the other side it was not easy to forget about them, no easier than with Federer or Nadal today, but that discipline is what is required to be a champion.

While most of us have no desire to be the best in that sense, the point is to pull back your energy from being concerned with the other, and simply be yourself.

When you really look at the ball rather than thinking of where you are going to hit it, or who you are hitting it to, or receiving it from, the ball always goes to the right place, the best place, without having to think about it at all. This is the no mind space, the let go. Tantra.

For related reading, see “The Inner Game Of Tennis” by Tim Gallwey.