Congratulation! your data has been updated.
Articles / Bali / Shark Attack In Bali 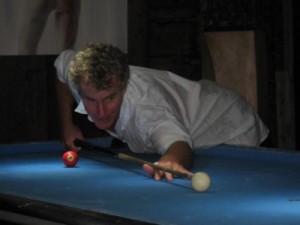 Not really a shark attack In Bali, but I did get attacked by a shark while in Bali, but not by a fish, but of the pool variety!

My girlfriend has long been talking about playing pool with me, and now we are in Bali she decided to take me to an Indonesian pool hall.

This was a large L shaped verandah of a building with maybe 20 pool tables, most of whom in use by Balinese with the obligatory cigarette haggling from their lips. Mmmmmm, looked interesting but pretty murky also.

I am a good pool player, and have had periods in my life when I have been really good, winning quite a good income when I was a teenager, and had told my girlfriend this.

She immediately went up to what looked like the boss, asking for someone to play with me, that I was very good and I needed to play with someone ‘good’.

Before I knew it she had informed the whole pool hall that I was a star, which was effectively the same as putting a bulls eye on my forehead.

Yes the boss said, he would play me, but only for money, and no he was not very good but would try!

I have not played for money for 30 years, have never seen this guy play, and have no idea what the local conditions are like – quality and weight of cues, speed and true-ness of table and cushions – but somehow found myself agreeing to two games, for 30,000 and 50,000 rupiahs respectively.

So I started, and while the cue was straight, it was very light, which means you have to hit the ball quite hard to get any speed on it (with a heavier cue you can get away with a very light touch) which increases the risk of twisting and therefore missing.

I floundered for a while as he got out to a 4-5 ball advantage, so I started playing for time, defensively, to get myself back into the game. He also started missing some shots, and I caught up, ultimately winning the game.

He won the second game, playing better, while I got a bit nervous and missed shots at important moments, and I gave him the 50,000. Playing for money is a different game, and I found it very hard to get settled, to get comfortable as I set up for a shot.

This is normally a strength of mine, but money dangling, to lose or to win, over a table was quite unnerving, even if it is only $5-6. I found myself very nervous, shaking a little as though my life depended upon winning.

Strange what betting does, at least to me, and am happy that I chose to do something else with my life than play pool!

Now it was on to the third game and he played better again, going for and completing much more difficult shots, as I did, though with him I was not sure if it was deliberate or if he had just warmed up.

We then left, 120,000 rupiahs lighter, with me not having any real idea as to how good my opponent was, whether I would ever be able to win against him or whether he would simply toy with me while raising the stakes.

Hence the shark title. A good lesson. And it only cost me AU$15!

AND, never go into a pool room telling everyone how good you are. Especially not some guy who spends hours and hours every day playing pool, pretty much as his job, and for whom 120,000 rupiahs is a very good day’s pay.

AND, if you think you were lucky to win a game against a hustler, most likely it was not luck but simply a set up.

Check out balifoodandfun.com for a fairly broad list of venues in Seminyak, Pettitengit,Kuta, with pool tables.