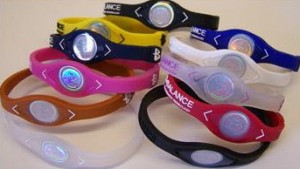 What product ever does what it is advertised to do?

I just read the report of the ruling by the ACCC in Australia on the Power Balance Bands that have taken the sports world by storm over the past year. (see link at bottom of page)

The ACCC has ordered that Power Balance Australia refund all monies to people who believe they were duped in to buying, because they can not be shown to work.

This is despite famous sportsmen world wide who like to wear them and insist there is some positive effect.

At the recent Australian Open Tennis Championships I noticed both Andy Roddick and Novak Djokovich wearing Power Balance bands, and others wore them too.

Others also wore crucifixes, others ‘lucky’ hats, and are paid to use certain equipment which has the subtext of ‘use this and your game will improve’ but the TGA rightly ignores that.

Beware of the TGA

The investigation by the ACCC was instigated by the ‘pharma funded’ TGA (Therapuetic Goods Administration) who chose to spend valuable resources verifying whether these bands did anything, instead of checking to see if the new arthritis drugs produce heart attacks like the last lot did, or if those anti-anxiety pills that have people hallucinating so radically that they are finding themselves waking up while driving or painting a door or similar.

ie, how come they do this crap instead of something that merits their attention?

It always surprises me when the TGA pops into the news as it is never really about safeguarding public health as much as safeguarding pharma profits or giving the non-pharma health industry a kick when it can.

I came across these bands a year or so ago, and was quite impressed at the affect it had on my sense of solidness. When I was in Bali in September I bought one, and immediately, instantaneously, noticed an improvement in my tennis.

Immediately I was hooked.

The improvement in my game waned as, getting cocky, I started paying less attention to other aspects of my game, and went back to old habits pretty much straight away.

However, the changes that occurred in my game since I started wearing one have remained long after I stopped wearing it.

So maybe they open a door, like your first ‘e’ or LSD trip, that does not close again?

In my tennis circle quite a few wore the bands, and swore by them, including a guy who used to beat me convincingly. One day when he did not have his bracelet I beat him 6-0.

He also swore by his band for swimming, saying that wearing a powerband enabled him to do butterfly like he had never done before.

One of the interesting things is that when tested, there was no discernible difference between the original ones made by Power Balance and sold for $30 (originally $50), and the knock-offs made in China for a few cents which sell on Bali streets for $4-5.

I personally have done the balance test with perhaps 50 people, and of those 48 were stunned, while the other two were already very ‘earthed’ people (ie, massive tree trunk legs, or simply very grounded).

I know of professional cyclists who wear them and swear by them. I stopped wearing mine while playing tennis, though occasional wear it while at the gym where I notice a greater ease in doing my strength routine, and I wear it just as an experiment.

Given that I do this to build my conditioning for how my body feels, not to achieve something, the Power Balance band is irrelevant for me in the gym.

My stepdaughter likes to wear one while horseriding, finding that it increases her ability control her horse.

Now none of this is to say that the Power Balance bands do anything, as it may all indeed be psychological, but one has to question these quasi-government regulatory authorities, especially the TGA, slamming them so strongly.

I cannot imagine them coming out and saying crucifixes do not do anything so anyone who feels misled should get a refund.

Or similarly with new sports cars that are advertised as improving your sex life, I cannot imagine the ACCC demanding refunds if does not work.

And also, people spend a lot of money on a lot of crap, and that is their choice, and really, if anyone thinks that wearing a bracelet is going to change their life then they need to meditate!

The ACCC says that there was misleading claims in the promotional literature for Power Balance bands.

Have they questioned whether things really go better with Coke?

Or that buying that new car will mean pretty girls want to be with you?

Do they order churches who sell crucifixes to refund money of the person gets sick or dies?

The whole advertising industry is based on spurious claims, so one has to question why the TGA initiated this investigation and the ACCC followed it up, when clearly there are other products far more deserving of their attention.

To illustrate my point re the TGA: Do you recall the TGA’s PAN scam? PAN produced approximately 75% of vitamins sold in Australia along with various herbal remedies, and retailed and wholesaled these throughout Australia.

One of its products was Travelcam, which was meant for people who got airsick.

There were 2-3 reports of people getting nauseous on Travelcalm, basically a ginger-based concoction, with interviews with distraught women saying how awful they felt.

No dramas, but hey, I feel awful after drinking margaritas all night and so what?

A deep investigation of PAN was initiated, resulting in PAN being shut down, and the TGA ordering refunds to customers who had bought vitamins from any number of health food stores across Australia.

Vitamin C vats were shown to be contaminated by traces of Vit B and vice versa, posing ‘very significant risks to the consumer.

Gee, 5 mcg of Vimanin E found its way into a Vit b tablet… What a pile of twaddle!

This resulted in 400 health food stores having to go out of business as they had to wear the cost of refunds.

The impact on the alternative medicine industry was enormous, exactly what the TGA, which was quite nervous about the national sales of vitamins and herbs exceeding those of pharmaceuticals, had in mind.

It also put some vitamin companies out of business with significant impacts on diversity.

Fast-forward several years and the High Court of Australia ruled that the TGA had insufficient evidence upon which to investigate let alone destroy PAN, and ordered the TGA to pay costs and [from memory] some $50m to its owner, who just after died of a heart attack, a broken man after being dragged through the mud by a compliant media.

Bear in mind that while the TGA appears to be a government-run body, it is in fact entirely funded by big pharma who jealously guard their turf and operate under very little regulation.

This is like the the fox running the chicken house.

Just pay attention to the weight that media gives to stories that denigrate the alternative view of health and the belief that people have in whatever they choose.

Then pay equal attention to negative stories about pharmaceuticals and see what weight is given, what gravitas the journo gives off.