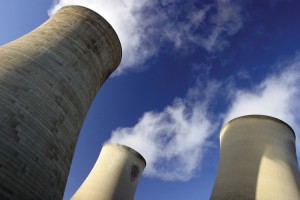 It kind of crept up on me towards the end of 2005, as it was being slowly introduced into editorials, news items, and page three stories. All of a sudden, it was common knowledge: nuclear power was not only back on the agenda, but it was apparently green and safe!

The propaganda worked on me slowly and stealthily. I found myself making assumptions that all of the issues that condemned nuclear power back in the 70s — the waste, the mining tailings and the operational safety issues — had all been magically solved, and that yes, the new peak-oil, climate-changed world needed nuclear power.

I then researched an article on the use of depleted uranium in weapons — a relative side street of the nuclear discussion — and discovered that indeed nuclear was no safer now than in the 70s.

See Depleted Uranium – a Legacy of Treason on this site

And yet the subtle creep of insertions into the daily media had almost convinced me that nuclear power was in fact the answer to our new woes.

It is interesting to note that GE and Westinghouse, two of the largest corporations in the world, build nuclear power plants, and also own large chunks of the NBC and ABC networks in the US, and thus are in control of the parameters of the nuclear debate there and abroad.

Simultaneously, the global warming and peak-oil discussion has somehow morphed into a nuclear conversation. The nuclear industry has cleverly co-opted the environmental factors for its own benefit.

The behaviour of the media has been fascinating to observe. Every now and again an editorial appears referring to Australia’s nuclear power stations as a fait accompli.

There is an idea slowly gathering momentum and credence to export enriched uranium under licence and import it back to store in some remote outback, Northern Territory cattle station, thereby ensuring valuable export income.

And — what a coincidence — there is even a brand new rail link on which the spent fuel and the liquid waste, radioactive for up to 250,000 years, can be ‘safely’ shipped from Darwin!

[In November 07 I learned that the operator of this train is a British company whose main business is transporting nuclear waste in England. Ex PM Howard may have locked Australia into this folly already, hopefully Rudd has more sense].

In 2014 the local tribe succeeded in its High Court challenge against this site being used, so it is back to the drawing board. Powerful men such as ex PM Bob Hawke have put their considerable weight behind the idea of Australia providing a nuclear waste dump for the world.

The Darwin to Alice Springs track was built by KBR for around $2 billion. KBR is a subsidiary of Halliburton, famous for its Dick Cheney connection, Iraq war profiteering and for its inside running on future US strategic and military plans.

The idea that the track was an economic investment, to support trade, (which any basic business plan or economic analysis would debunk) was simply a smokescreen to future (US) military and nuclear material transport requirements. Apparently it was never intended to have a normal commercial use.

With the ongoing failure of the US Yucca Mountain storage project, attention has shifted to Australia for US nuclear waste disposal. Siting this nuclear dump on the confluence of three major river systems was foolhardy at best and treasonous at worst.

Meanwhile, in another sleight of hand, previous Prime Minister John Howard set up a task force of ‘neutral’ eminent Australians to study the economic and environmental feasibility of nuclear power. Ziggy Switkowski, former Telstra CEO, was commissioned by Howard to head the task force. (See )

Firstly, it was probably impossible to find anyone who is truly neutral on the nuclear power issue. One either understands the dangers or doesn’t.

And secondly, the evaluation of every cost factor must be included in such a study — which it wasn’t.

Dr John Blakemore, President of the Manufacturing Society of Australia and former nuclear technologist involved in Australia’s abandoned nuclear power project, stated to me in an email;

Where is this cost of the risk of a meltdown? Why won’t private insurance companies in the USA cover this risk?’

The pro-nuclear literature makes no realistic attempt to quantify the disposal and storage of nuclear waste. It is either missing or some futuristic fairy story is presented as the on-the-ground reality.

(Then Prime Minister) Howard said that we can safely store nuclear waste in the Northern Territory. Really?

Is there any reason to believe he is right, when he has been wrong on so many other things, including children overboard, WMDs in Iraq and global warming?

Global warming is real and the changes it will bring, both the unavoidable and avoidable, will be more intense and chaotic than anyone is currently talking about publicly. Coalfired power stations are responsible for some of global warming.

Mostly, though, it is the short-sighted policies of big business and the rampant consumerism it has fostered that have produced the global crises we face today.

Putting up nuclear power as a panacea to both peak oil and global warming, undoubtedly appeals to 1950s style paternalism, an Ann Rand solution, but is simply insane.

Labor’s historic reluctance towards nuclear has always cost them the vote in a country frightened of anything remotely appearing ‘alternative’ or ‘green’.

Peter Garret, ostensibly Labor’s rabid anti-nuclear campaigner, seems to have given up, and Australia seems to be heading down the nuclear path, regardless of medium and long term consequences, and have given approval for more mines on the false premise that nuclear power will reduce global warming, and provide the energy to increase the standard of living in poor countries (so the nuclear industry is now humanitarian???).

This is why it is absolutely imperative for the future, not only of our country, but of our planet, that the Greens hold the balance of power in the Senate so industries such as nuclear and GE with massive PR budgets have some legislative oversight as their sole interest is in making money, not what is good and right.

In Australia the main political parties are largely controlled by the media which is controlled by the advertising clout of big business who tend to define the parameters of any community discussion – eg, there is no discussion of the greenhouse impact of nuclear power in terms of decommissioning of power plants, construction and restoration of mines and storage of nuclear waste for 200,000 years.

While relatively few Australians have any financial stake in nuclear, those that do seem to hold a lot of media strings, and so the nuclear lobby, with its transnational funding, succeeds in getting its viewpoints presented as truth.

This is plainly a manipulation of public opinion by financial interests, and while not unusual, is very significant because of what it means for our children and their children and the next 9998 generations upon whose head will sit the decisions Australia soon makes about nuclear power and uranium mining.

It is time for those who are passionate about preserving our planet, our forests, our wildlife, the air we breathe, to make our presence felt and heard by the politicians who want our votes.

Write to the papers, to the TV stations, to your MP — push your agenda. Challenge the integrity and diligence of your politicians. And vote Green in the Senate.

Regardless of who is in government, our future depends upon the Senate being controlled by people who put safety and humanity’s future ahead of profits.