Congratulation! your data has been updated.
Articles / General / Martial arts: a foundation for life

Martial arts can be one of the best things a child could do to prepare him or herself for life.

Rather than an end unto itself, martial arts provides a strong and supportive foundation for children as they move into other aspects of their lives, be it other sports, learning at school or relationships with others and themselves.

Martial arts can teach a child how to relate to the world in a new way by showing how to not be afraid or to act out of fear and to develop inner as well as outer strength and flexibility.

Generally it can be said that kids gain a sense of balance. By this I mean not just physical balance, but energetic and emotional balance also.

What is learned is precision in action and reaction, where you respond according to what is coming at you.

Martial arts and other sports

I remember assisting in a workshop that combined tennis and martial arts and was stunned how every participant’s tennis game lifted dramatically over the five days.

Not only were people able to play more powerful shots, which was for me an expected outcome, but they were able to receive another’s power easier.

Rallies would go longer and be more adventurous, with less emphasis on winning and more on pushing each other to be better. Surely this is the real aim of competitive sport and of relating to life in general.

Children learn concepts such as moving ‘from the hara’ (also known as the Tanjen) which is that place about an inch below the navel. In the martial arts tradition it is the source of all power, of our life force.

They learn to use the breath to create a connectedness between the mover and the movement.

My experience of sport, and therefore of challenges in life, is that battles are won and lost in level of focus, of intent; ie the hara.

Being ‘in the hara’ is natural but when we are under pressure, threatened or intimidated, we move up into our head where we can undermine ourselves.

A foundation in martial arts gets us rooted in our centre whereby it is difficult to dislodge or intimidate us.

One of the most important factors in kids learning things is the quality and experience of the teacher. With martial arts this is even more so.

The main things to look for in a martial arts teacher are:

Learning to fall, to deal with ‘failure’

In martial arts children learn how to fall.

Children are often afraid of falling and hurting themselves — literally and figuratively.

This carries into adulthood, usually manifesting as a fear of failure. One thing that is guaranteed to happen in all of our lives is falling (or failure).

Learning how to fall physically without hurting ourselves and getting straight back up is a big step as it also prepares us for falling in other ways too.

Flying through the air in some of the tumbles and kicks is utterly exhilarating, especially when you have the confidence of knowing that you can land safely.

It engenders suppleness in both the body and psyche and teaches us to bend and to bounce back up again. 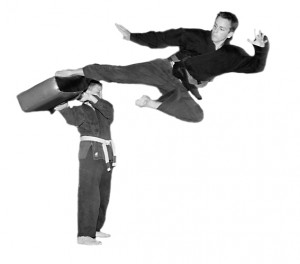 Martial arts arose from the need for Taoist monks in ancient China to protect themselves, and was developed as a meditation in action, hence the emphasis on self-defence rather than fighting.

The body of knowledge which spawned martial arts is connected to the roots of acupuncture and shiatsu, which is why a lot of the movements are also simulating various energy meridians in the body, thus promoting health.

Learning how to defend ourselves, to protect ourselves, is a very important part of growing up.

This is not just to do with being attacked physically, but also in all of the other ways we can be attacked.

How this translates in the world is not over reacting or avoiding conflict, standing your ground, allowing others to have their opinion without feeling like you have to convince them that you are right.

Many of the difficulties that as adults we have in relating is to do with how we may unconsciously attack another.

They get defensive and a cycle is set in motion and before we know it the conflict has spiralled to something altogether different.

I often see young boys who are all over place, clumsy, rarely ‘in their bodies’ (this applies equally to most men, the grown up boys).

I remember the feeling myself when I was a boy. It was hard to focus, boring to be present because there didn’t appear to be enough happening to warrant my attention.

In boys today, this has more recently been labelled a sickness called ADHD and with it the medicating of children in pandemic proportions.

I believe this is just a matter of boys in particular not being grounded, of being present, of knowing what being present feels like.

Martial arts is the best grounding possible as there is much emphasis on body awareness and focusing energy and with its emphasis on form, it also teaches grace in movement.

For girls, doing martial arts is fabulous for confidence, to know that they can access some tools with which they can defend themselves, particularly against boys who are usually stronger.

Simple hand holds, throws and kicks, once mastered create a sense of empowerment that builds self-respect that is also nurtured by being physically fit and supple.

What martial arts should a child do? I would choose, at least as an introduction, something with equally aggressive (yang) and passive (yin) aspects, with a lot of kicking and punching, rolls and falls, and handholds.

This allows a grounding in something rounded and fitting to their immense supplies of energy, Hapkido I liked because it combines Aikido, Judo and Karate and other forms.

After some time they may choose something softer like Aikido, or Tai Chi.

Whatever is chosen, the mastery of self-discipline, inner strength and balance will be a wonderful contribution to the overall well-being and confidence of your child.