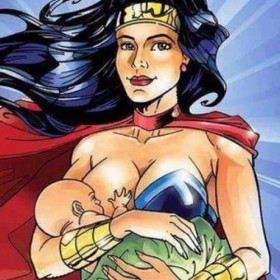 As the co-publisher, along with my then wife, editor Kelly Wendorf, of Kindred magazine, I was inundated with and immersed in information like breastfeeding makes better brains I would never, as a non parent, have dreamed of being interested in.

And of course one of the biggest things I was completely unaware of was the impact of breastfeeding on child development.

I came across many studies about breastfeeding aiding immunity, supporting the connection and bonding between mother and child and a plethora of other leg-ups that breastfeeding gave the child in his or her early years, many of which continued throughout their lifetime.

And of course, many of these studies could be ignored by the politicians and agenda-setters in their rush to put babies in day-care and mothers back to work as soon as possible on the basis that the upsides were not always measurable or empirical.

A study undertaken at Brown University (US) and published on Science Direct, demonstrates clearly, in an empirical way, the upside of breastfeeding, that babies who are breastfed show significantly greater growth in the brain, particularly in areas relating to language, cognition and emotional function, compared to babies who are formula fed or breast/formula fed.

Previously behavioural studies have linked breastfeeding with better cognitive outcomes in older adolescents and adults, but this is the first to look at the impact of breastfeeding on the brains of the very young.

These scans showed that by the age of two, babies who had been breastfed exclusively for at least three months showed significantly increased neural development.

The study showed the babies split into three groups, one being those breastfed exclusively for three months who had the fastest growth, by age two, in myelin which insulates nerves and facilitates speedier neural transmission, which is the measure of brain development.

Those babies that were fed a mixture of breast and formula had less myelin than purely breastfed babies, and more than those who only had formula.

Sean Deoni, assistant professor of engineering at Brown University who leads Brown’s Advanced Baby Imaging Lab, said that the difference in myelin comparing breastfed- and formula-fed babies was in the order of 20-30%, an astounding difference.

What happened when the kids got older?

The researchers then backed up this research with basic cognitive tests on the older children, finding better language performance (though this may simply be a result of the mother talking with her child whilst breastfeeding, connecting, rather than simply giving him a bottle while she is engaged elsewhere).

Whist the language and visual enhancement may simply be a result of the increased direct connection with the baby that happens when breastfeeding versus bottle feeding, the motor control aspect is something different.

The study also looked at the effects of longer term breastfeeding, comparing those babies who were breastfed for less than one year and those who were breastfed longer, and found significant increases in brain growth the longer a baby was breastfed, reflecting especially in those areas related to motor function.

So it seems that as kids grow and interact more with their world, differences in language and visual receptivity decrease while the motor development differences remain.

Perhaps in some years these same children can again be tested to check on whether these differences remain, or if breastfeeding simply accelerates development in these areas, allowing more energy to flow to other areas of development such as emotional cognition.

In March 2015 in an article entitled The longer babies breastfeed, the more they achieve in life – major study published on the Guardian website, a correlation between life outcomes and the length of time a child was breastfed was demonstrated by a long term study in Brazil.

There is clearly no question about breastfeeding being the best thing that a mother can do for the life of her baby.