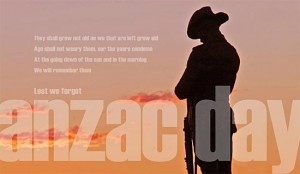 It is Anzac Day time again, and as usual there is so much written in defence of it as well as questions raised about the point of celebrating a slaughter on a battlefield Australians had no business being on.

There is something legitimate about Anzac Day however, perhaps truly the birthing ground of an Australian identity (one of our identities anyway) and I have no problem with it.

However, I do not think that the hijacking of it by sporting bodies who somehow equate playing football with going to certain death due to poor decisions by out-of-touch English generals, or putting your life on the line to protect your buddies, is appropriate.

In Australia our sense of identity is so vague and tenuous that we grasp Anzac Day for a kind of spiritual survival while the other big day on the Australian calendar, Australia Day is just drunken flag-waving, a mindless exercise on phoney nationalistic fervour.

I would prefer to see more of an annual discussion of what Anzac Day means beyond Gallipoli, Vietnam, beyond war and soldiers, and beyond the two-up gambling game that is legal on this day and this day alone.

By all means honour the vets, but if we want to revere the Anzac spirit, let’s define it and perhaps have some public leadership as to how that is relevant to today.

Maybe Anzac Day could be a day for honouring (which is not the same as glorifying) our elders, our past, where kids go to rest homes to acknowledge the ‘oldies’, the pioneers.

And by ‘elders’ I mean those who have come before, whether they be soldiers or their mothers and wives, the people who stayed at home on the farms feeding the nation, the trailblazers blasting roads through mountains and forests, the local heroes whose lives wer given in sacrifice to the building of this modern nation.

Honouring the Indigenous peoples whose heroes’s lives have been blanked out of our history books. And of course the mistakes made and that continue to be make in terms of the custodians of this island home of ours.

Maybe Anzac Day could become a truth-telling day, where, in a similar way to Mother’s Day where we honour our mothers, we have a day where we are encouraged to have those big conversations with our intimates or even the quick ‘I love you’s. A day of respect.

Perhaps that might be more meaningful than spending the day in bars or at Two-up gatherings or going to the footy on Anzac Day.

Anzac Day could also be a day for community projects where people come together and donate a day to come together to create something communal.

Tree planting, picking up rubbish, there are all kinds of things that could happen that may cause some reflection on the past and our role in the continuim of time, our place in our historical landscape.

This would certainly help with our collective current malaise of feeling neither a sense of belonging to anything meaningful or being connected to our world.

Anzac Day is popular as it is because Australia is so bereft of concepts as to who we are as a people with the default position usually some phoney nationalism copied from America.

What about using Anzac Day, as a unique to build, or to assist in the construction of, a meaningful connection to country, to history, to community?

Something more along the lines of the US Thanksgiving holiday where families come together and feel gratitude.

I for one, while respecting the role of soldiers in our history, and even in our present, would love to see this special day charged with something more creative than simply supporting the old ‘go to war’ paradigm.

In April 2015 I saw the movie, The Diviner, a story of the father of two boys reported missing in Gallipoli who goes to find them.

He encounters the Turkish people who were still reeling from having lost 70,000 men (versus 10,000 Australian and New Zealand soldiers) in what was a pointless battle for the Imperial forces yet a battle for the very survival of the Turkish nation.

He gets a taste of the truly abhorent nature of war, of its trail of death and destruction. A brilliant movie.

Article By: Mark O'Brien Related to: Current Affairs Musings About